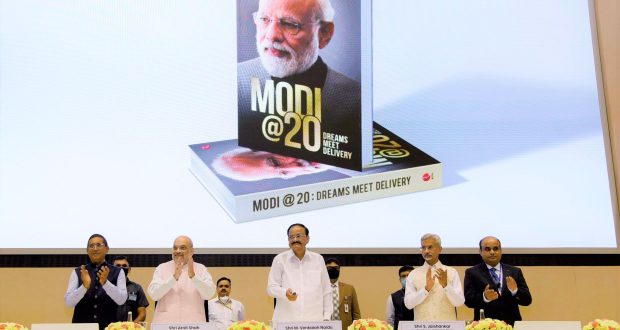 in Literature, National 16 days ago Comments Off on Releases a book ‘Modi @ 20 : Dreams Meet Delivery’ 60 Views

Newdelhi:11/5/22:Describing Prime Minister Shri Narendra Modi as one of the most popular and iconic leaders of modern India, Vice President of India Shri M. Venkaiah Naidu today decoded what he called the ‘Modi phenomenon’ with an elaborate exposition of the attributes of Shri Modi and other factors that contributed to it. He released a book titled ‘Modi @ 20: Dreams Meet Delivery’, a compilation of 21 articles by 22 domain experts bringing out various aspects of the thinking and performance of Shri Modi in various domains as Chief Minister of Gujarat and Prime Minister for 20 years since 2021.

In his 35-minute exploration of the mind, methods and vision of Shri Modi, the Vice President listed various attributes that made Shri Modi a unique leader and performer furthering the interest of Gujarat earlier and of India now as Prime Minister.

Referring to the attributes that underlined the success of the Prime Minister,  Shri Naidu listed: 1. An early experiential journey of Shri Modi after leaving home at the tender age of 17 years in search of self, the people and the country through extensive travels and socio-cultural work; 2. Deep understanding of the struggles of Indians and India and their potential; 3. Abiding faith in the potential of individuals and India; 4. Courage to dream big and the resoluteness to convert Sankalp into Siddhi; 5. Thinking big and acting in scale; 6.Ability to take bold decisions; 7. Being undeterred by temporary failures and episodic surprises;   8. Passion, energy and hard work; 9. Thinking and acting differently; 10. Converting crisis into opportunity; 11. Adopting a bottom-up approach for policymaking and execution ensures people’s participation; 12. Quest for details and comprehensive assessment of issues and consequences; 13. Deploying the experiences and results of Gujarat experiments for the evidence-based formulation of policies and programs at national level; 14. Extensive adoption of technology for effective governance; and 15. Passionate promotion of the mantra of ‘Perform, Reform and Transform’.

Referring to the quintessential and transformational leadership of the Prime Minister, Shri Naidu said; “Even his detractors agree that Shri Modi is now a phenomenon at the national and international level due to which India is being regarded and respected”.

Stating that Shri Modi’s vision has been shaped by his long years of an experiential journey before becoming the Chief Minister of Gujarat, the Vice President stressed that “This is the fundamental differentiator that makes Shri Modi unique in several ways. There is probably no other public figure in contemporary times who had such an experiential journey”. He further said that the Prime Minister’s vision for the country is an expression and manifestation of numerous felt experiences accumulated during his stints as a social activist to start with and later, as a political activist.

Recalling his working with the Prime Minister earlier as a Union Minister of Urban Development, Shri Naidu elaborated on the keenness of Shri Modi for details of every issue to enable robust and fail-proof planning and execution. Shri Naidu, in particular, highlighted Shri Modi’s commitment to making the Swachh Bharat campaign a ‘Jan Andolan instead of looking at it as a routine governmental program, a philosophy that marks all initiatives of the Prime Minister. 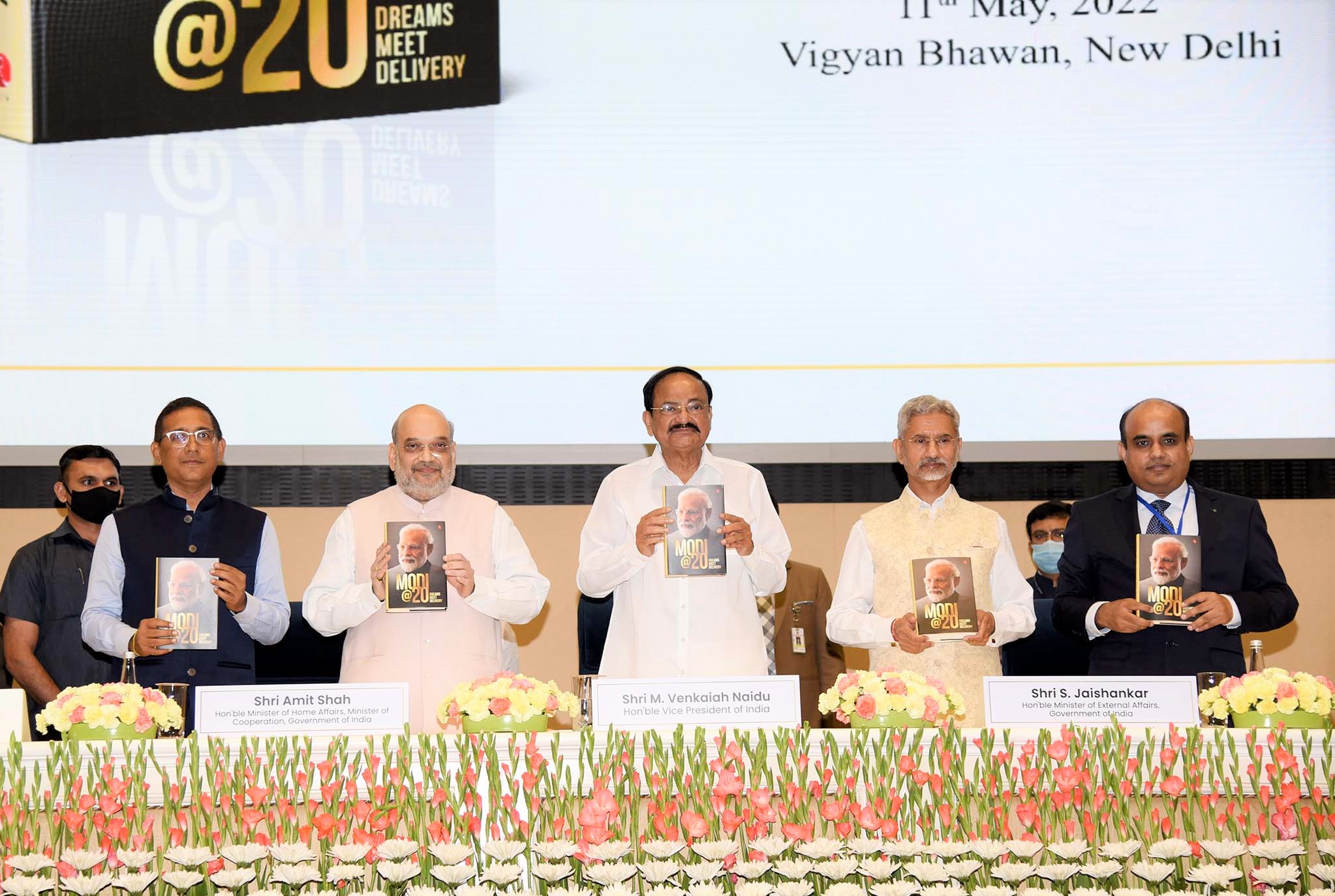 The Vice President said that being aware of India being big in numbers with humongous problems, Prime Minister Shri Modi thinks big executes in scale and speed, and as a result over 45 crore bank accounts have been opened for the unreached; over 12 crore toilet and 3 crore houses have been built for dignity of life of the poor; 5 crore MUDRA loans have been sanctioned to make entrepreneurs out of the unheard of; over Rs. 20 crore have been transferred to the beneficiaries under 320 schemes under DBT by effectively harnessing the technology;  8 crore LPG cylinders have been given to relieve poor women from the drudgery of using firewood for kitchen and ensuring piped water supply to 19 crore households etc.

Shri Naidu described the Prime Minister as a ‘scientist’ for extending various schemes successfully implemented earlier when Shri Modi was the Chief Minister of Gujarat based on the results and thereby enabling the evidence-based formulation of projects and schemes.

Referring to Shri Modi being called an ‘election machine’, Shri Naidu noted that for Shri Modi, elections are not an outcome of politics but constitute social science with a deep understanding of the life contexts of common people and deep insight into their aspirations that make Shri Modi a successful campaigner.

Shri Naidu has lauded the contribution of Shri Modi to the deepening of democracy in the country by arousing people’s interest in every succeeding election by proving himself a one who delivers on promises made and thereby living up to the hopes and aspirations of the people.  Stating that people looked at Shri Modi as one who would repair their broken dreams and restore India to prosperity, Shri Naidu described the politics of Shri Modi as one of ‘hope’.

The Vice President further noted that “the ability, mobility and stability (with required majority in the Lok Sabha) of Prime Minister Shri Modi is leading India to prosperity”.  Shri Naidu asserted that Shri Modi is impatient only with tardy implementation of policies and schemes as he is keen on scale and speed of execution since India is still facing developmental gaps in the 75th year of Independence and is keen on bridging those gaps.

Shri Naidu said that MODI is all about the Mission of Making of Developed India and urged all the parties in power in different States to make effective use of all available developmental and democratic platforms to make the nation surge ahead. He called for ensuring a peaceful environment in the country by ridding it of all tensions to realize this mission.