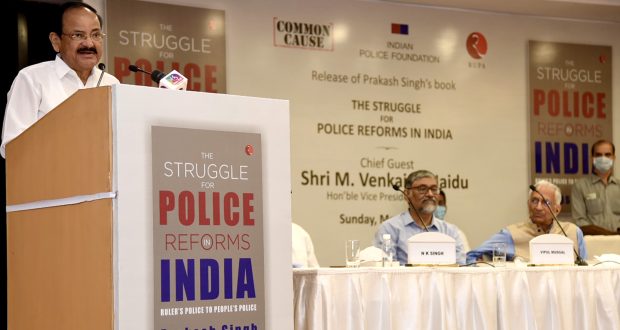 Newdelhi:8/5/22:The Vice President, Shri M. Venkaiah Naidu today emphasised that “a progressive, modern India must have a police force which meets the democratic aspirations of the people” and called for a renewed thrust to implementing reforms in the police forces.

Addressing a gathering after releasing the book titled “The Struggle for Police Reforms in India” written by a former IPS officer, Shri Prakash Singh, the Vice President stressed the need to upgrade the skills of our policemen to effectively tackle 21st-century crimes such as cybercrimes and economic offenses which require special investigative expertise due to their sophisticated and often transboundary nature.

The Vice President specifically highlighted issues that need to be addressed on a war footing, including filling up of the huge number of vacancies in police departments and strengthening the police infrastructure in tune with the requirements of modern age policing. He called for particularly strengthening the police force at the grassroots, who are the first responders in most cases. Shri Naidu also wanted the housing facilities of police personnel to be improved.

Stressing that the behavior of policemen towards the common man should be courteous and friendly, the Vice President called upon the senior police officers to lead by example in this regard. “A visit to a police station should be a hassle-free experience for a person who goes there seeking help. The first thing to reform for this is the attitude of the police – they must be open-minded, sensitive, and receptive to each individual citizen’s concerns”, he further said.

Noting that police reforms are a highly important and sensitive subject, the Vice President said that although there have been various attempts at introducing reforms over the years, progress has not been made to the desired extent. He called for a political will in the states to properly implement the reforms, according to the Supreme Court guidelines.

Shri Naidu also reiterated the need for police reforms to uphold law and order in the country and to sustain India’s economic growth. “Peace is the prerequisite for progress”, he said.

Recalling the history of policing in India, the Vice President said that after the revolt of 1857, the British created a police force with the prime aim of upholding their imperial interests, and during the freedom struggle, used the police to mainly suppress and oppress our freedom fighters and revolutionaries. “After independence, sweeping reforms were needed in policing. Unfortunately, we have lagged behind in this crucial area,” he said.

2022-05-08
Editor in chief
Previous: President of India inaugurates permanent Campus of Indian Institute of Management, Nagpur
Next: Agriculture Minister will have a roundtable discussion with Israeli Agritech Startup companies