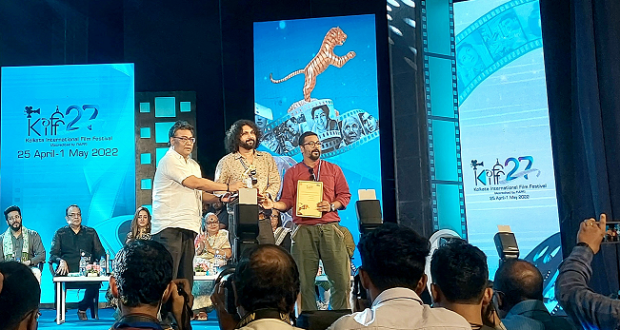 Bhubaneswar:4/5/22:Odia feature film Adieu GODARD has won the BEST FILM award in the Indian Language’s Competition at the prestigious 27th Kolkata International Film Festival (KIFF) that concluded on 1st May. Written and directed by National Award winner Amartya Bhattacharyya, the film saw a tremendous response from the film lovers of Kolkata. Beating the heat, they turned up in huge numbers for all the shows of the film at KIFF 2022. The film is an INDIA, FRANCE co-production and has been produced by Swastik Arthouse in collaboration with FilmStop Entertainment and Les Films de la Haute-Vallée.

Choudhury Bikash Das plays the central character around whom the film revolves. Shot exquisitely in Odisha, the film is a socio-cultural comic tribute to the legendary French filmmaker Jean-Luc Godard.

Dipanwit Dashmohapatra, Sudhasri Madhusmita, Swastik Choudhury,  Choudhury Jayaprakash Das, Shankar Basu Mallick, Abhishek Giri, Swetapadm Satpathy and Dr. Banikanta Mishra play other important characters of the film a. The music has been composed by the talented Kisaloy Roy, and the popular icon of Rock music- Rupam Islam has rendered his first Odia song with this film

Here is the official trailer of the film: https://www.youtube.com/watch?v=rvM4BT7Fh6M

2022-05-04
Editor in chief
Previous: On the occasion of Akshaya Trutiya Odisha Chief Minister has released around Rs 800 crore under the KALIA scheme
Next:  Construction of chariots for the world-famous annual rath yatra of Lord Jagannath and his siblings began