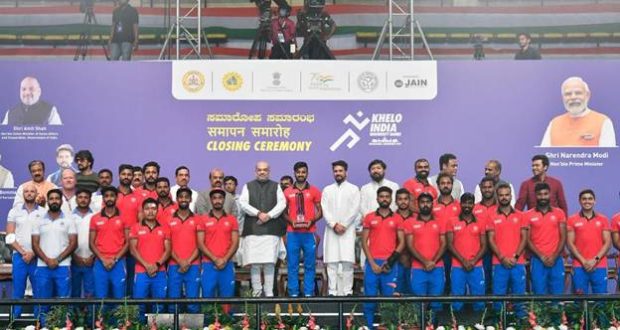 Newdelhi:3/5/22:A glittering closing ceremony drew curtains on yet another memorable edition of the Khelo India University Games 2021 which witnessed the country’s young and aspiring athletes use the platform to bring laurels to their respective universities. 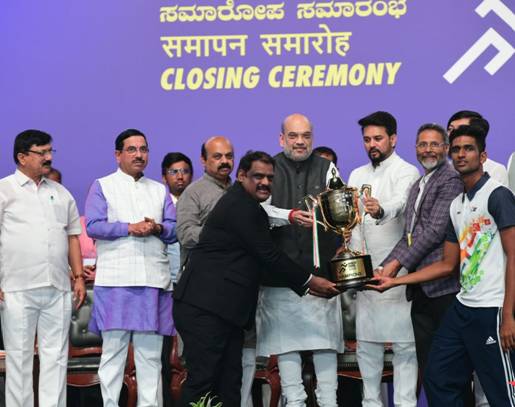 The presence of the Indian Men and Women’s Hockey teams who had a historic outing in the Tokyo Olympic Games was a highlight of the evening, and the two teams were felicitated by the Union Minister for Home Affairs Shri Amit Shah. Sandalwood cine icon Kicha Sudeep too graced the occasion

Crediting the performances of the country’s youth brigade, Shri Amit Shah, who released the coffee table book on Khelo India University Games prepared by AlU, said,”I congratulate all the Universities and the athletes who participated at the Khelo India University Games 2021. All the athletes who participate are deserving of applause.Winning or losing is part and parcel of sports. But to compete in sports is the more important thing. Since 2014, PM Narendra Modi made a mission of his life to make India the No. 1 nation in every area, including sports. He never worried about problems, but planned, worked hard, and found ways to bring results. In sports, PM Modi took a series of initiatives, and today, we can see the beautiful result of the same initiatives

.”I want to tell athletes that sports are an important aspect of our life. The one who plays sports will only get success in life. Because sports give us the courage to face defeat in life. Only then, you can develop the desire to win. Our athletes are making us proud at the Olympics these days which is evident from India’s unprecedented medal tally at the Tokyo Olympics 2020 and the Paralympics. And PM Modi has developed a roadmap to ensure, by 2047, when India celebrates its 100th year of Independence, India would be among the top five nations at the Olympics,” Shri Amit Shah added 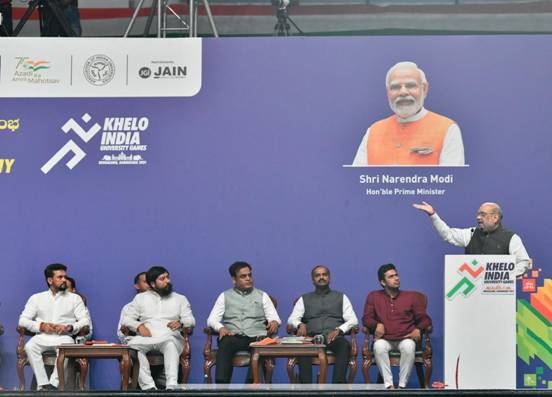 Congratulating the efforts of all participating athletes and the hosts Jain University, Union Minister for Youth Affairs and Sports, Shri Anurag Singh Thakur said: “Khelo India University Games, Fit India, and Khelo India Youth Games are the result of PM Modi’s vision. I am glad we made the decision to host the 2nd edition of the Khelo India University Games in Bengaluru this year. I can say with utmost pride that despite the Covid-19 pandemic, the KIUG 2021 has been an outstanding and very successful event. The athletes here broke 2 National Records and 76 previous records of University Games this year.”

Commending the efforts of the state government and Jain University, Chief Minister of Karnataka Shri Basavaraj Bommai after the launch of the postal cover of Khelo India Youth Games 2021, said, “Sports are natural aspects of human beings. It shows and forms the character of all the humans. It teaches a person the importance of sportsmanship. You have to play to win and not to lose. You should not be afraid. We should not have fear of losing but willing to win. Prime Minister Narendra Modi came with the vision of Khelo India. Sports have the power to change the direction of the country and I urge all the youths in India to bring glory to the nation