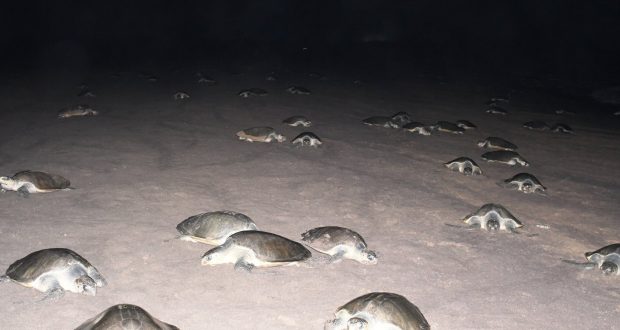 Kolkata:30/4/22:The Zoological Survey of India (ZSI), under the Union Ministry of Environment, Forests and Climate change has initiated massive tagging programme in collaboration with the Wildlife Wing of Odisha’s forest department of Olive Ridley Sea Turtles since 2021, stated Dr Dhriti Banerjee, Director, ZSI. According to Dr Banerjee, such an initiative has been taken for the conservation of this rare species of turtle and ZSI plans to continue the programme as part of the long-term monitoring of the species (at least for next 10 years) through annual data collections, tagging and tag recaptures.

According to Dr Anil Mohapatra, Scientist-E & Officer-in-Charge, Estuarine Biology Regional Centre, ZSI, The present study adopts a mark-recapture method to identify the nesting habitats, foraging habitats and post-mating migration, post-nesting migration, inter rookery movement patterns, reproductive longevity and growth etc. of the olive ridley sea turtles.  The Inconel 631 metal flipper tag manufactured by the National Band and Tag Company (NBTC) of Newport, Kentucky, USA marked with a serial number (00000) and a return address (ZSI NAPO KOL-53 IN) used for the purpose of flipper tagging. Double tags were attached adjacent to the first large scale of both the front flippers to avoid tag loss. The tagging programme by ZSI along the Odisha coast was initiated in January 2021 and a total of 8450 turtles were tagged, of which 188 mating pairs, 8252 female, 198 male turtles tagged to date.

This apart, night hour patrolling along the beaches was carried out to survey the nesting turtles and tag recapture. The sea turtle populations are extremely fragile and face a range of threats. Considering the vulnerable status of the species, the study will also serve as a foundation for long-term conservation and management plans for the Olive Ridley turtles of Odisha and India.

Besides, the tag recovery provides information on population demographics, migratory pathways and geographical ranges when tagged turtles are recovered from a distance, feeding areas, breeding frequency, inter-nesting interval, philopatry or nest site fixity, growth rate when turtles are measured on tagging and recaptured, and population size also can be enumerated. Sea turtle study along the Odisha coast is still in its early stages, and many elements of this animal’s biology and behaviour remain unknown. This study, it is aimed to continue the work in the long term and to contribute as much as possible to the unfolding facet of biology and behaviour of the Olive Ridley Turtle along the Odisha coast of India. It is to be mentioned that Gahirmatha, Devi and Rushikulya are the major mass nesting beaches of Olive Ridleys along the Odisha Coastline in India in the Bay of Bengal region

2022-04-30
Editor in chief
Previous: Odia’s short film ‘Sani’ was adjudged as the best film on ‘Living and Sustainable Technologies’at the “11th CMC Vatavaran Film Festival
Next: Dharmendra Pradhan releases the Mandate Document for the development of National Curriculum Framework