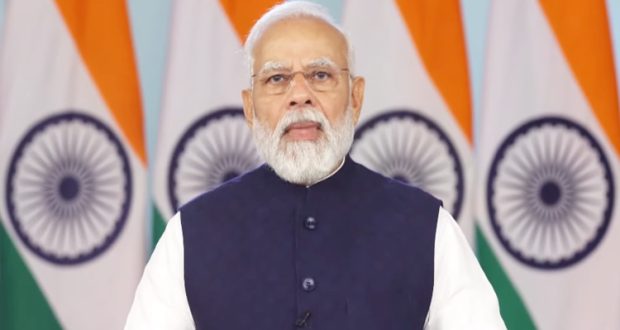 Newdelhi:29/4/22:Prime Minister Narendra Modi today inaugurated Semicon India Conference-2022 through video conferencing. The three-day event is taking place in Bengaluru. Speaking on this occasion, Prime Minister underlined the critical role of semiconductors in today’s world and said that our collective aim is to establish India as one of the key partners in global semiconductor supply chains.

He said India wants to work in this direction based on the principle of Hi-tech, high quality and high reliability. During the programme, the Prime Minister underlined six reasons for India being an attractive investment destination for Semiconductor technologies.

First, India is building a digital infrastructure to connect over 1.3 billion Indians. Describing the strides that India has recently made in the field of financial inclusion, banking and digital payment revolution, the Prime Minister said that India is using digital technology to transform lives in all sectors of governance from health and welfare to inclusion and empowerment.

Mr. Modi said, with steps like connecting six hundred thousand villages with broadband investment in developing capabilities in 5G, IoT and clean energy technologies, India is paving the way to lead the next technology revolution.

As the fourth point, the Prime Minister said, India has undertaken wide-ranging reforms for improving the Ease of Doing Business in India. Fifthly, Mr. Modi said that India has made heavy investments in skilling and training young Indians for the needs of the 21st century. He said the country has an exceptional semiconductor design talent pool which makes up to 20 percent of the world’s semiconductor design engineers.

The Prime Minister said India has undertaken several measures toward transforming the Indian manufacturing sector. Sixthly, at a time when humanity was fighting the once-in-a-century pandemic, India was not only improving the health of our people, but also the health of our economy.

Mr. Modi acknowledged the need for government support and assured the audience of the best efforts of the government to provide a conducive environment for business.

The three-day conference is being organised to take forward the vision of the Prime Minister to make India a leader in electronics manufacturing, semiconductor design, manufacturing and innovation.

2022-04-29
Editor in chief
Previous: IWEC is going to organised India’s First Women’s Business Mela from 04 to May 2022 to 08 th May 2022
Next: Santosh Trophy Championship: Manipur to take on West Bengal in second semi-final