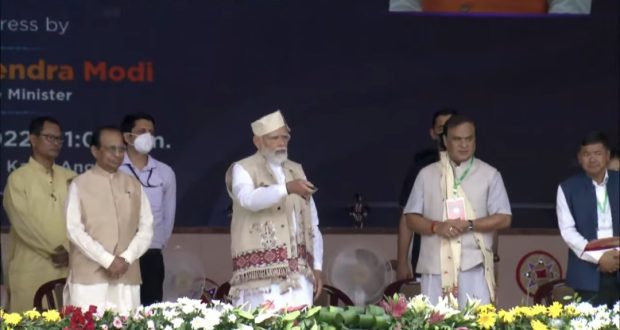 Assam :28/4/22:Prime Minister, Shri Narendra Modi addressed the ‘Peace, Unity and Development Rally’ at Diphu in Karbi Anglong District today. During the programme, he also laid the foundation stone of various projects. The Prime Minister laid the foundation stone of Veterinary College (Diphu), Degree College (West Karbi Anglong) and Agricultural College (Kolonga, West Karbi Anglong). These projects, worth more than Rs 500 crore, will bring new opportunities for skilling and employment in the region. The Prime Minister also laid the foundation stone for more than 2950 Amrit Sarovar projects. The state will develop these Amrit Sarovars at a cumulative cost of around Rs 1150 crore. Governor of Assam, Shri Jagdish Mukhi and Chief Minister of Assam, Himanta Biswa Sarma were among those present.

Speaking on the occasion, the Prime Minister thanked the people of Karbi Anglong for their warm welcome. He noted the coincidence of Azadi Ka Amrit Mahotsav and 400th Anniversary of the great son of Assam Lachit Borphukan falling in the same time period. “Lachit Borphukan’s life is an inspiration of patriotism and Rashtra Shakti. I salute this great hero of the country from Karbi Anglong”, the Prime Minister said.

The Prime Minister said that the ‘double engine’ government is working with the spirit of Sabka Saath Sabka Vikas, Sabka Vishwas and Sabka Prayas. “Today this resolve has been reinforced on this land of Karbi Anglong. The work of carrying out the agreement which was signed for the permanent peace and rapid development of Assam is going on at a brisk pace”, he said. 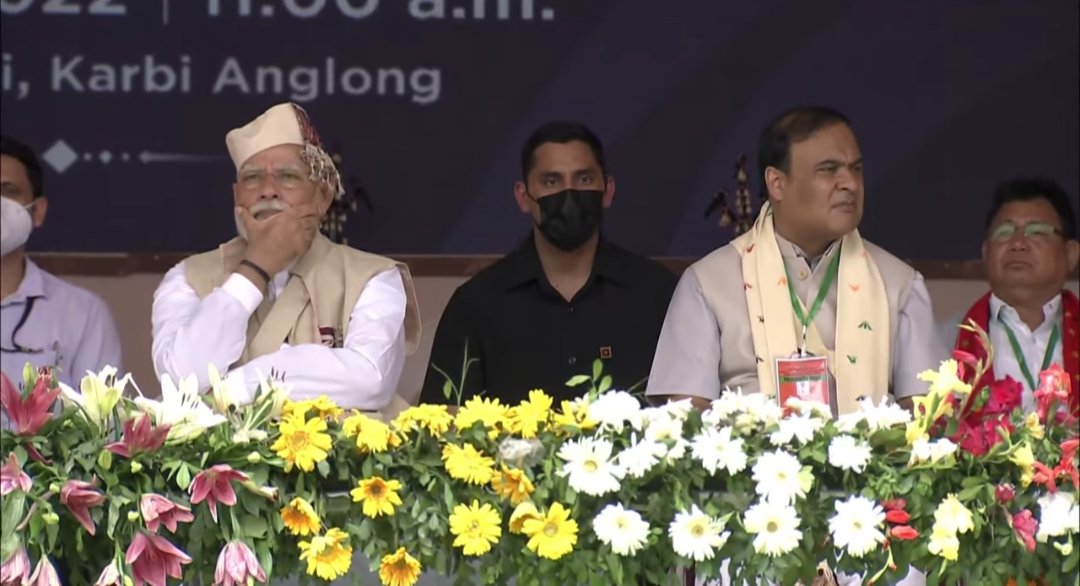 Prime Minister Modi noted that today the work of construction of more than 2600 Sarovars is starting. This project, he emphasized, is completely based on people’s participation. He acknowledged the rich traditions of such sarovars in the tribal communities. He expressed the hope that these ponds will not only become the water storage for villages but will also become a source of income.

Talking about the rich cultural heritage of the tribal communities, the Prime Minister said “The culture of tribal society, its language, food, art, handicrafts, all these are the rich heritage of India. Assam is even more prosperous in this respect. This cultural heritage connects India, and strengthens the spirit of Ek Bharat Shreshtha Bharat.”

Prime Minister Modi said that in the Amrit Kaal of Azadi, Karbi Anglong is also moving towards a new future of peace and development. Now from here, we don’t have to look back. In the coming few years, together we have to make up for the development, which we could not achieve in the earlier decades, he added. The Prime Minister appreciated Assam and other state governments of the region for implementing the center’s schemes with a sense of service and dedication. He thanked the women for coming out in such large numbers and reiterated his continued focus on the upliftment of status, ease of life and dignity of women in all the measures of the government.

The Prime Minister concluded by assuring the people of Assam that he will repay their love and affection with interest and rededicated himself to the continued development of the region.