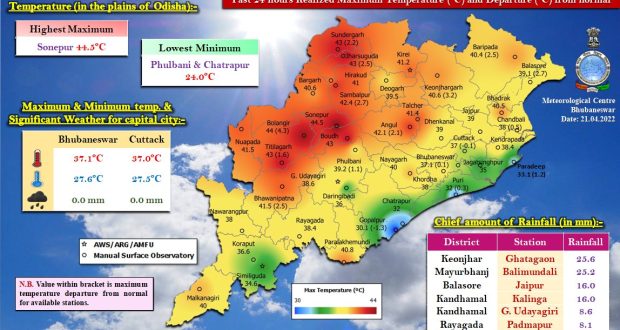 in State News April 21, 2022 Comments Off on Odisha continues to be on the boil with the intense heatwave gripping more and more parts of the State 117 Views

BHUBANESWAR:21/4/22:  Odisha continues to be on the boil with the intense heatwave gripping more and more parts of the State. On Wednesday, 19 places in the State recorded temperatures over 40 degrees Celsius, while in at least six places the mercury soared above 43 degrees.

The western Odisha region bore the brunt of the sizzling heat conditions with Sonepur recording the State’s highest temperature at 44.5 degrees Celsius, followed by Balangir at 44 degree. Jharsuguda, Sundargarh, Titlagarh and Boudh recorded 43 degree each.

The Twin City of Bhubaneswar and Cuttack recorded 37.1 degree and 37 degree respectively on the day.
However, people may get some respite over the next couple of days as a few places in Odisha are expected to witness a fall in day temperature due to thunderstorm activity.

The India Meteorological Department (IMD) on Wednesday said that maximum temperature is likely to fall by two to three degrees at a few places in the State during the next two days. Thunderstorm with lightning is likely to prevail over one or two places in many parts of the State on Thursday.

“The maximum temperature may gradually rise by two to three degrees from April 24 onwards. Interior districts in Odisha have been witnessing intense heat due to stable atmosphere and as coastal winds are not able to penetrate into the region,” said Bhubaneswar Meteorological Centre Scientist, Umasankar Das.