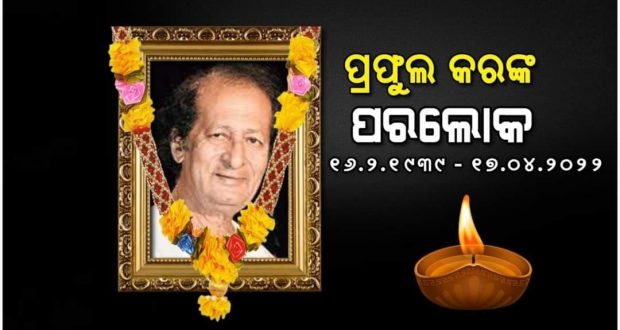 Bhubaneswar:17/4/22:An acclaimed musician from Odisha, Prafulla Kar left for his heavenly abode late on Sunday night. He was 83. Kar breathed his last at his residence in Satyanagar of Bhubaneswar. He was suffering from old-age-related health ailments for quite some time, last rites will be performed at Puri Swarga Dwara on Monday (tomorrow), his family sources said.

.Born in 1939, Kar was a master musician, singer, lyricist, writer all-in-one, and indeed a great virtuoso. He had weaved magic with his magical tone and mystical creation in music during his decades-long illustrious career.

Considered a pioneer in giving a new identity to Odia music industry, Kar is credited to have given voice to around 70 hit Odia films and creating numerous musical productions.

He was felicitated with India’s fourth-highest civilian award, the Padma Shri in 2015 for his invaluable contribution to the field of art and music.

Kar was also a recipient of the prestigious Jaydev Award in 2004, Odisha’s top award given to a personality for outstanding contribution to the growth and development of Odia cinema.

Condolences poured from all sections of society pay tributes to the music legend whose demise has left an unfillable void yet promises an ever-lasting legacy in Odia music.

In a condolence message, Chief Minister Shri Patnaik described the late Kar as a successful artist. As a lyricist and music director, he has set many glorious records. His demise marks the end of an era in the world of Odia music. The Chief Minister said that his unique musical style and direction will always immortalize him in the hearts of the people. The Chief Minister has announced that the funeral of the late Kar will be held with state honors.The Prime Minister, Shri Narendra Modi has expressed deep grief over the demise of eminent Odia musician and singer Prafulla Kar.Shri Modi has said that Prafulla Kar Ji will be remembered for his pioneering contribution to Odia culture and music.The Prime Minister tweeted;”Anguished by the passing away of Shri Prafulla Kar Ji. He will be remembered for his pioneering contribution to Odia culture and music. He was blessed with a multifaceted personality and his creativity was reflected in his works. Condolences to his family and admirers. Om Shanti.