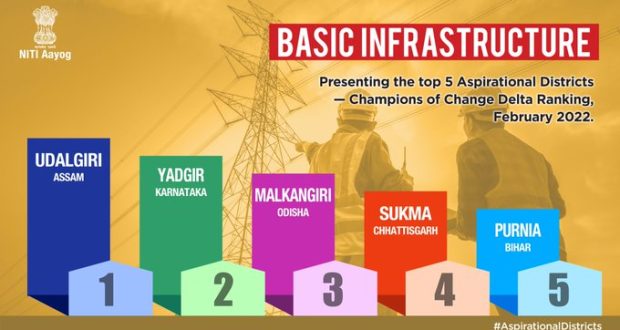 in National, State News April 14, 2022 Comments Off on Odisha’s Malkangiri has secured the third spot in the top 5 most improved Aspirational Districts in the Basic Infrastructure sector 104 Views

Malkangiri: 14/4/22:Odisha’s Malkangiri has secured the third spot in the top 5 most improved Aspirational Districts in the Basic Infrastructure sector, as per NITI Aayog’s Delta Ranking for February 2022.

The Aspirational District programme aims to effectively transform 112 most under-developed districts across the country. The broad contours of the programme are ‘convergence’ (of Central and State schemes), ‘collaboration’ (of Central, State level ‘Prabhari’ officers and district collectors), and ‘competition’ among districts through monthly Delta ranking; all driven by a mass movement.

The ranking is based on incremental progress made across 49 key performance indicators (KPIs) under five broad socio-economic themes – health and nutrition, education, agriculture, and water resources, financial inclusion, and skill development and infrastructure.