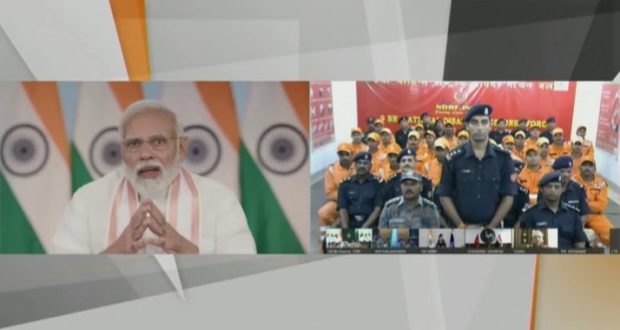 PM Modi interacts with those involved in Deoghar Rescue Operation

in National April 13, 2022 Comments Off on PM Modi interacts with those involved in Deoghar Rescue Operation 71 Views

Minister of Home Affairs and Minister of Co-operation, Shri Amit Shah complimented those involved in the rescue. This is an example of a well-coordinated operation, he added. He said that under the leadership of Prime Minister Shri Narendra Modi disaster management transcended earlier relief-based approaches to emphasize preventing the loss of lives. Today there is an integrated setup at every level to react and protect lives all the time. NDRF, SDRF, Armed forces, ITBP Police, and local administration worked in exemplary coordination in the operation, Shri Amit Shah added.

Speaking on the occasion, the Prime Minister praised the rescue teams and offered condolence to the families of the bereaved. “Country is proud that we have a skilled force in the form of our armed forces, Air Force, ITBP, NDRF and police personnel, that has the capability to protect citizens in the time of distress”, he said. “For three days, round the clock, you completed a difficult rescue operation and saved the lives of many countrymen. I also consider it to be the grace of Baba Vaidyanath Ji”, he added. 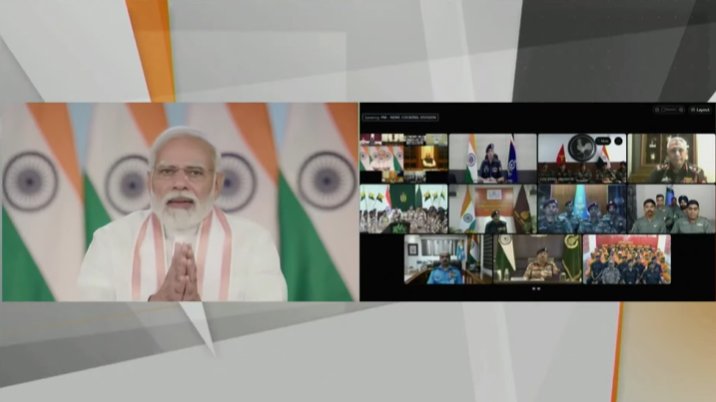 Group Captain Y K Kandalkar of Indian Airforce informed about the Airforce operation during the crisis. The Prime Minister noted the skills of the pilots navigating helicopters so near the wires. Sergeant Pankaj Kumar Rana, of  Indian Airforce, explained the role of Guarana commandos in rescuing the passenger in the adverse conditions of the cable car and amidst the distress of the passenger including children and women. The Prime Minister praised the extraordinary courage of the air force personnel.

Shri Pannalal Joshi of Damodar Ropeway, Deoghar, who saved many passengers, explained the role of civilians in the rescue operations. The Prime Minister said that helping others is part of our culture and praised the resourcefulness and courage of these people.

Shri Anant Pandey Sub Inspector ITBP explained the role of ITBP in the operation. ITBP’s initial successes raised the morale of the stranded passengers. The Prime Minister appreciated the patience of the entire team and said that success is assured when challenges are faced with determination and patience.

Shri Manjunath Bhajantari, District Magistrate and Deputy Commissioner, Deoghar explained the details of local coordination of the operation and how the morale of the passenger was maintained till the arrival of the Air Force. He also provided the details of multi-agency coordination and channels of communication. He thanked the Prime Minister for the timely help. The Prime Minister asked the DM how he used his science and technology background during the operation. The Prime Minister asked for proper documentation of the incident so that repeat of such accidents can be avoided.

Brig Ashwini Nayyar narrated the role of Army in the operation. He talked about the rescue from cable cars. at a lower level. The Prime Minister praised the coordination, speed and planning of the teamwork.

The Prime Minister said in such cases, response time is critical for success. He said that people feel assured after seeing the uniform. The Prime Minister continued “People have a lot of faith in the uniform. Whenever people in distress see you, they believe that their life is now safe, new hope awakens in them”.

The Prime Minister expressed satisfaction that the needs of children and elderly were always kept in mind during the operation.  He appreciated the constant improvement in the forces with every such experience. He praised the determination and patience of the forces. He reiterated the government’s commitment to keeping the rescue forces updated in terms of resources and equipment. “This entire operation has been a reflection of sensitivity, resourcefulness and courage”, he said.

The Prime Minister noted the resilience of the passengers who showed patience and courage. He specially commended the local citizens for their dedication and sense of service. Shri Modi congratulated the passengers who were saved. “This crisis has once again made it clear that whenever any calamity strikes the nation, we put up a united front against the challenge and come out victorious. ‘SabkaPrayas’ played a major role in this operation also”, Shri Modi said.

He expressed condolences to the affected families and prayed for the recovery of the injured. He concluded by requesting all those involved in the operation to document the details and learn meticulously for future use.