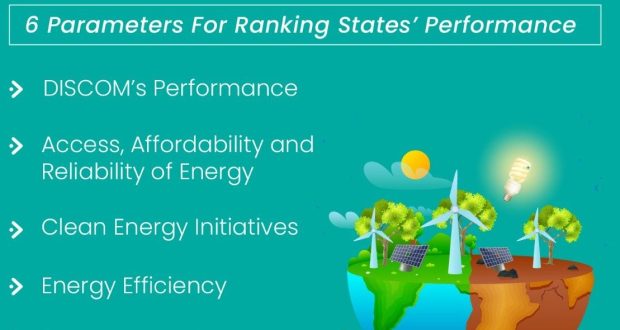 Launch Event of the State Energy and Climate Index Round- 1

in National April 12, 2022 Comments Off on Launch Event of the State Energy and Climate Index Round- 1 75 Views

Additional Secretary Dr. Rakesh Sarwal presented the key findings of the Report. The State Energy & Climate Index (SECI) Round I ranks the states’ performance on 6 parameters, namely, (1) DISCOM’s Performance (2) Access, Affordability and Reliability of Energy (3) Clean Energy Initiatives (4) Energy Efficiency (5) Environmental Sustainability; and (6) New Initiatives. The parameters are further divided into 27 indicators. Based on the composite SECI Round I score, the states and UTs are categorized into three groups: Front Runners, Achievers, and Aspirants.

The states have been categorized based on size and geographical differences as larger states, smaller states, and UTs. Gujarat, Kerala, and Punjab have been ranked as the top three performers in the category of larger states. Goa, emerged as the top-performing state in the smaller states category, followed by Tripura, and Manipur. Among UTs, Chandigarh, Delhi, and Daman & Diu/Dadra & Nagar Haveli are the top performers. Detailed state profiles and scorecards have been included in the report which provides a comprehensive snapshot of each state and union territory on the various parameters. 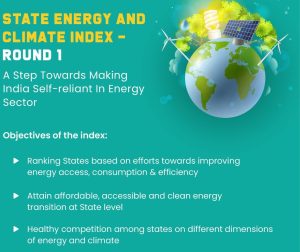 This edition of the report reveals that some of the important data is not available at the state level. There is a need to develop a robust mechanism for capturing such data so that it can be incorporated into future editions of the report.

Speaking on the occasion, Dr. Rajiv Kumar, Vice Chairman, NITI Aayog said that there is a need to convert our efforts towards achieving the ‘Panchamrit’ targets announced by the Hon’ble PM at COP-26, Glasgow into a peoples’ movement. In order to do this, the role of the States is going to be critical. Governance innovation and mutual learning by states shall go a long way in improving outcomes and SECI Round I is the right step in this direction.

Dr. V.K Saraswat, Member, NITI Aayog, remarked that synergy and partnership among the Centre and the States will be critical for achieving energy and climate-related goals and making the country self-reliant in the energy sector. He said that after extensive discussions with stakeholders, several key parameters have been identified to track and rank the performance of the states in this report.

Shri Amitabh Kant, CEO, NITI Aayog said that achieving the ambitious climate targets would require a conducive policy environment to encourage investment. He also remarked that the State Energy & Climate Index Round-I will help initiate a dialogue with the states on the energy sector so that much-required policy improvements can be made.

Secretary Power appreciated the work taken up by NITI Aayog for coming out with State Energy & Climate Index. He stressed that clean energy transition is inevitable. The role of DISCOM’s is paramount and their viability is the crux. He pointed out that regulatory assets at the same time need to be liquidated which is making DISCOMs unviable.