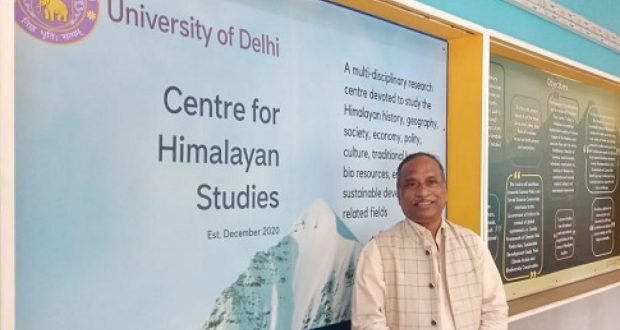 Imphal: 12/4/22:The scientists from Manipur have found a new plant species of “Cherry Blossom” and as a mark of respect and for the outstanding contributions of scientist Dr. Dinabandhu Sahoo, they named the new plant species as “Prunus dinabandhuana”.

The Cherry Blossom or “Sakura” is the national flower of Japan, which is also a source of inspiration for the Japanese people, and India became the 28th country in the world that had earlier been included in the Sakura Map.

For Sahoo’s over eight years long determined efforts, the “Cherry Blossom” is now available in six of the eight northeastern states, excluding Assam and Tripura.

In November 2016, Dr. Sahoo, a professor at the Department of Botany at the University of Delhi (DU) planned and organised India’s first “Cherry Blossom Festival” in Shillong which attracted lakhs of people and subsequently, became an international event for the past six years.

According to Dr. Avitoli G. Zhimo, Assistant Director, Centre for Himalayan Studies in DU, scientists Biseshwori T and Jenifer M from Imphal (Manipur) based Institute of Bio resources and Sustainable Development (IBSD) found a new plant species of “Cherry Blossom”.As a mark of respect and for the outstanding contributions of Sahoo, they named the new plant species as ‘Prunus dinabandhuana’ (Family Rosaceae) in his first name.

2022-04-12
Editor in chief
Previous: 12 places in Odisha recording a maximum temperature of above 40 degrees Celsius
Next: PM Modi interacts with those involved in Deoghar Rescue Operation