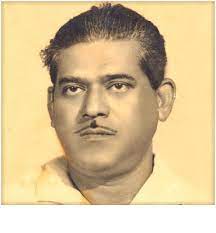 in Odia Cinema April 11, 2022 Comments Off on First film director from Odisha to win a National Film award 182 Views

Nitai Palit(8 March 1923-26 July 1990)    was the first film director from Orissa to win a National Film award. In 1965 he received the President’s Silver Medal as a director for the film “Malajanha”. Considered a classic in Oriya cinema, this film was based on a novel written by Upendra Kishore Das. This Odia film is a sensitive depiction of Natha Nana, whom sati loves silently. The ending sees Sati committing suicide because of the persecution of the people of her village. The last dialogue of the film is the cry “Sati Sati”, which resonates much after the film is over. Malajanha also introduced the extremely talented woman lyricist, Binodini Devi. Akshaya Mohanty had debuted as music director. The music of the movie was influenced by the Sufi singing of Odisha.

Nityananda Palit, better known as Nitai Palit was born in Cuttack on 8 March 1923 to Nagendranath Palit and Sarojini Devi. He completed his schooling in Ravenshaw collegiate school and was interested in drama and music from an early age, theater attracted him. Nitai Palit had married Beena Das who had essayed the lead female role in Kedar Gouri film. that was Beena’s first and the last film.

He started his career as a talented stage director and was a regular in winning drama competitions. Nitai brought in new interpretations to Orissa’s theater. Nitai got interested in cinema as a medium of expression and self-taught himself the technicalities of filmmaking. Never did he attend any film institute and was entirely self-taught. He was awarded ‘Best Director by the govt. of Orissa four times, in 1973,(As best Director For Bandhan) 1974 (as a Director for Dharitri and Manakash), 1977 (As a Director For Bandhu Mohanty) the Orissa Sangeet Natak Academy Award and Highest honor for Odia cinema Jaydev award in the year 1982. In 1980, he set up his own production house ‘Creative Movies Productions’ and produced two movies Anurag and Raghu Arakhita.

He was active until the last. His film “Kichhi Aasa Kichhi Swapna” was in the process of being made when, on 26 July 1990, when he expired due to a massive heart attack. Indian cinema lost an icon.

@All  rights reserved by www. odishanewstimes.com No parts of this article can be reproduced in any format, without the permission of the author.