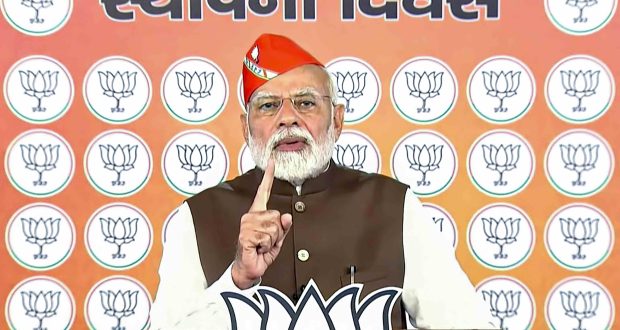 New Delhi:6/4/22: With over four decades of presence of one of the largest political parties in India, the Bharatiya Janata Party celebrated its 42nd Foundation Day here in New Delhi. Hundreds of BJP members and party workers thronged the headquarters here in the national capital and participated in different activities including remembering the history of Jana Sangh, BJP’s parent party. Prime Minister Narendra Modi also addressed his party workers via live stream and thanked them for their contribution towards BJP’s presence and success in different states. As of 2022, BJP is heading 12 states with majority and six states via an NDA alliance. The party has many reasons to rejoice in its Foundation Day, one being winning four of the five recently held assembly elections and clinching 101 seats in the Upper House of the Parliament.
Claiming that the BJP has changed the negative perception of the common man towards political parties, P.M Modi said, “The people had accepted that be it the government of any party, nothing will be done for the country. But today, every citizen of the country is proudly saying that the nation is changing and going ahead swiftly.” He also took a jibe at the opposition political front Congress party, without naming it, saying, “family parties have never allowed the youth of the country to progress… They have always been betrayed.”

P.M Modi also said that his party is dedicated towards “Rashtra Bhakti” while its rivals stand for “Parivar bhakti”. P.M Modi in his virtual address said that India stood firm with its interest while being viewed as a nation that can speak about humanity at a time when the world is divided into two rival factions After paying homage to BJP’s founders Deendayal Upadhyay and Syama Prasad Mukherjee, BJP President said during the tumultuous period of Covid, his party workers relentlessly worked for the aid of crores of people across the country. He claimed that even its rival factions believed that BJP was the sole party, during the pandemic period, to take relief operations for the masses. “BJP is not just a national party but its image is now that it is a party for the poor… A party that would support and empower the downtrodden, and will drive forward women and youth and the nation towards development,” J.P Nadda said. While the party headquarters was decorated with flowers and banners, it also organised a blood donation drive on the occasion of Foundation Day. In 1951, Syama Prasad Mookherjee founded Bharatiya Jana Sangh (BJS) and later it was merged with several other parties in 1977 to form the Janata Party. In 1980, a faction of former Jana Sangh members left Janata party and floated the BJP on April 6, 1980.

2022-04-06
Editor in chief
Previous: Centre has blocked the Odisha government’s ordinance to bring the Lingaraj temple and eight associated temples around the 11th-century shrine under a special law
Next: India government has approved structural and procedural reforms in the telecom sector