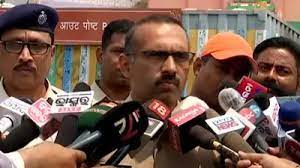 in State News April 6, 2022 Comments Off on Accused Confesses the Crime of vandalism of earthen ovens (chulhas) at the kitchen (Rosa Ghara) of the Shree Jagannath Temple 86 Views

Puri:6/4/22:The Puri Police on Wednesday claimed to have cracked the case of vandalism of earthen ovens (chulhas) at the kitchen (Rosa Ghara) of the Shree Jagannath Temple.

Briefing media regarding the arrest of the main accused involved in the ransacking incident, the first such case in the 12-century shrine, Puri SP Kanwar Vishal Singh informed that the suspect detained from Khordha on Tuesday has confessed to the crime during interrogation.

Singh said that during the questioning, the suspected youth identified as 30-year-old resident J Mohapatra from Begunia area of Khordha district, clarified that he felt uneasy about something and ransacked the ovens in the temple kitchen.

“The identification of the prime suspect seen in the CCTV footage has been completed. However, apart from his name and address, further details of the person have been withheld due to the sensitivity of the case,” said the SP.

“He had come to Puri on Saturday (the day of the incident) and visited Srimandir. As per his statement, he felt uneasy about something which is why he went to the kitchen of the temple and ransacked the chulhas. Thereafter, he moved out of the temple,” explained Singh.

He further stated that the youth’s identification was very challenging for the police as he did not possess a mobile phone.

“We took help from over 100 servitors and officials of the temple administration but could not identify the suspect from the CCTV cameras. Later, we formed multiple teams and released a sketch of the accused. As soon as we received the first clue of the accused from Puri Railway Station, all the immediate ten railway stations on the route were brought under the purview of investigation,” explained Singh.

“He has confessed to the crime but as of now, his statement seems vague and unclear. He has only clarified that he committed the act out of uneasiness. Further investigation is underway to divulge the exact motive behind the case,” added the Puri SP.

During interrogation, the youth said that after leaving the temple, he went straight to the beach and took a bath before boarding a train to Jatni, informed Singh.

The Puri SP said prima facie indicates that Mohapatra was alone in committing the act and no one else was involved in the incident.

2022-04-06
Editor in chief
Previous: New Chief Administrator of the Shree Jagannath Temple Administration Vir Vikram Yadav Visits Srimandir
Next: Centre has blocked the Odisha government’s ordinance to bring the Lingaraj temple and eight associated temples around the 11th-century shrine under a special law