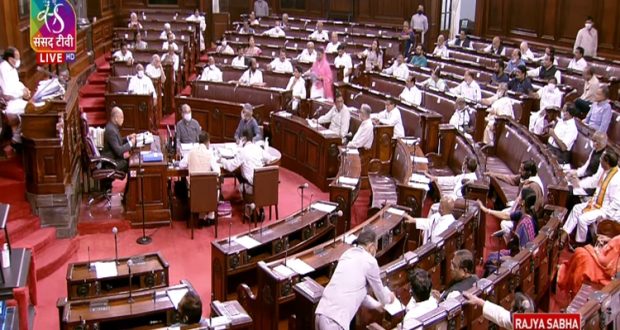 in National April 4, 2022 Comments Off on Rajya Sabha adjourned for the day following opposition uproar over the issue of fuel price hike 119 Views

Newdelhi:4/4/22:The Rajya Sabha has been adjourned for the day following opposition uproar over the issue of fuel price hike. When the House met after the first adjournment at 12 noon, the opposition members from Congress, TMC, Left and DMK trooped into the well raising the issue.

Earlier,  when the House met for the day, Chairman M Venkaiah Naidu disallowed the adjournment notices moved by the members from Congress, TMC, Left and DMK over the issue saying they had enough opportunity to raise it during the discussion on the Finance Bill. Following this, opposition members created noisy scenes leading to adjournment of the House till 12 noon.

In the morning, six newly-elected Rajya Sabha members from Assam, Kerala and Nagaland took oath.  They are Pabitra Margherita and S Phangnon Konyak of the BJP, Rwngwra Narzary of the  UPPL, P Santosh Kumar  and A A Rahim from Left and Jebi Mather Hisham of Congress.