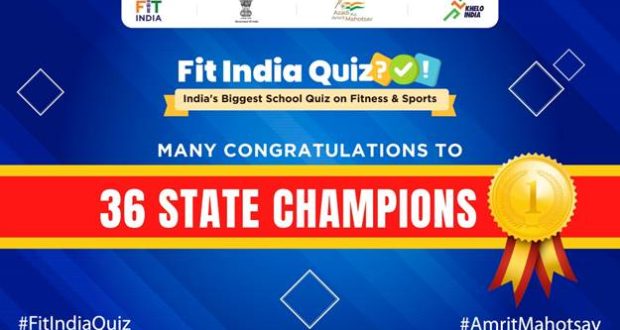 Newdelhi:4/4/22:36 winners of the Fit India Quiz State Rounds have been selected and will now represent their respective State and Union Territories in the upcoming national rounds.

The state finals, which took place in the month of February and March, saw participation from the qualified 359 schools, as they competed to become their respective state champions. The state champions have been awarded a cash prize of Rs. 2.75 lakh each (Rs.25k + 2.5 lakh for participants and their school) and will now represent their respective states in the upcoming Fit India Quiz National Rounds.

The 36 school teams (winner from each State and/or Union Territory) will now move to the national round that would take place in the National Capital Delhi and would be telecast on Star Sports & webcast on multiple social media channels.

The winners of the national quiz will win additional cash prizes for themselves and their school and also hold the honour of being called India’s 1st Fit India Quiz Champion.

The winners of Fit India Quiz State Rounds are –