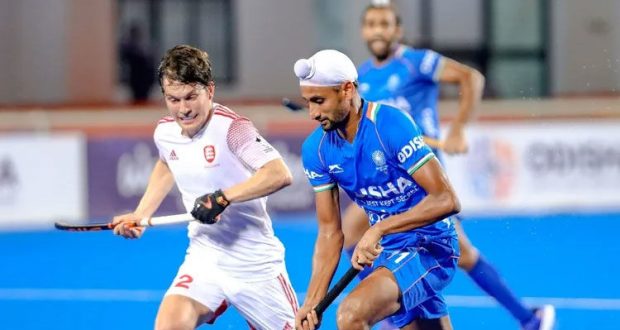 in Sports April 3, 2022 Comments Off on Indian Men Outlast England In Shoot-Out At Kalinga Stadium 207 Views

Bhubaneswar:3/4/22: A tense shoot-out following a frantic end to the regular period, saw Indian men come away with a bonus point in their match against the English. A real up and down battle saw the lead change hands thrice and thrice the trailing team equalised, the last of which saw England score from a Penalty Stroke with mere 12 seconds left to play. Much like the game the shoot-out also saw multiple opportunities for both teams to get the win and India finally did, on the 7th shoot-out attempt.

Dutch domination was the name of the game as a heavily one sided game saw the ball hardly go outside the USA half. A goal from Moes and two from Morgenstern gave Netherlands a comfortable 3-0 win, but the American defence gave a good account of themselves holding the Dutch scoreless in the 1st and 4th quarters, with multiple defensive stops against waves and waves of Dutch attacks.

A dominant start to the first quarter from England got them the early lead as India took their time finding their rhythm in the match. The goal came from a penalty corner, scored by Nicholas Bandurak, who is quickly emerging as a star for the English team. But India found their rhythm towards the end of the quarter and a great run into the circle followed by a pass from Shamsher Singh found Abhishek who was quick to get his shot off before the defence could close him down.

The second quarter was much more calculated from both teams as neither wanted to commit too many to the attack. India snatched the lead in the 27th minute as a 6-man struggle in the English circle lead to a push by Shamsher that hit the post and the rebound deflected into the goal off Sanford’s stick. England stuck right back however with another Nicholas Bandurak penalty corner conversion, as teams went into the break on level terms.

The second half saw India impose themselves more into the game as the high temperatures looked to be taking its toll on the English team. India won its first penalty corner deep into the game in the 52nd minute. It was Harmanpreet who had won the penalty corner and he finished it with a perfectly placed flick. With 3 minutes to go, England switched their keeper out for an outfield player and within a few seconds India had won another penalty corner. India missed the golden opportunity to seal the game from that set piece though as they tried a different routine and ended up turning over possession.

England got a penalty stroke with just 12 seconds left as a shot headed for goal hit Sumit on his leg. Sam Ward scored the resulting stroke and the match went into a shoot-out, where both teams scored 2 of their first 5 attempts. India went first in the sudden death and after both teams missed their first attempts, Abhishek scored the second one for India, while Ward missed his from the spot.

Player of the match Harmanpreet asked about his goal said: “Happy with the goal, happy for the team as well. We played a complete game, scoring 2 field goals and one from the penalty corner, which is my job and I was happy I could convert it.”

English captain Thomas Sorsby not too disappointed with the result said: “We had a great start to the game, and our aim for tomorrow will be to stretch that start and maximise it over the full 60 minutes.”

2022-04-03
Editor in chief
Previous: More than 100 earthen ovens (Chullahs) at the kitchen of Jagannath temple here were vandalised by unidentified people
Next: Odisha Government has effected a minor reshuffle in IAS cadre