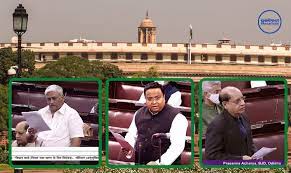 The tenure of three Rajya Sabha MPs from Odisha ended on March 31. They are Prasanna Acharya, Sasmit Patra, and Bhaskar Rao.

Vice President Venkaiah Naidu on Thursday greeted Members of Rajya Sabha who retired from the Upper House this month.

“Dr. Sasmit Patra was also Vice-Chairman of the Panel and he also conducted the proceedings in a very dignified manner,” the Rajya Sabha Chairman added.

2022-04-01
Editor in chief
Previous: Eight-member House Committee of the Odisha Assembly has been formed for inspection of Puri Srimandir heritage corridor project
Next: Odisha Coal and Power Limited has contributed Rs 10 crore to the Chief Minister’s Relief Fund