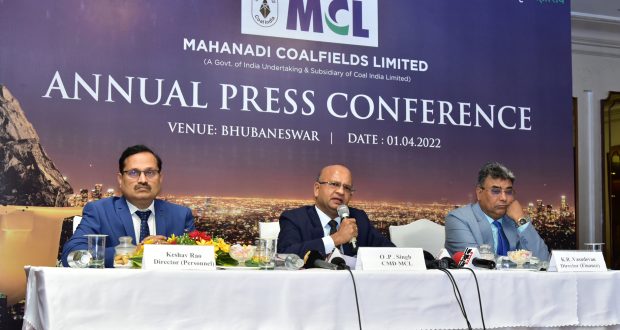 Bhubaneswar, April 1, 2022: Mahanadi Coalfields Limited (MCL) ended the financial year 2021-22 on a high note, clocking 168 million tonne coal production with an impressive growth of about 14% over the previous fiscal 2020-21.

The FY’22 overall remained the year of achievements for the production subsidiary of Coal India, as it has set new milestones in all the performance parameters vis-a-vis coal production, despatch and overburden removal (OBR).

Addressing the Annual Press Conference here, Shri OP Singh, Chairman-cum-Managing Director,  said, “The last fiscal has been a great year, full of achievements for the company, and I am happy to inform that MCL’s achievement in coal production had been 103% of target at a record 168.17 million tonne for the financial year ended yesterday.”

“Besides, the company has despatched 176.17 MT coal to the consumers, with a growth of about 21% over previous year.

“Similarly, MCL has registered a growth of more than 18% in overburden removal at 207 MCuM (million cubic meters), which will help us for increasing coal production during the current fiscal,” the CMD said.

Mr. Singh said that MCL had been successful in meeting the rising demand for coal during the third quarter of last Financial Year 2021-22, despite challenges posed by COVID19 pandemic.

He also expressed his gratitude to people’s representatives, state administration, coal consumers, Indian Railways, representatives of trade unions, peripheral villagers and all stakeholders for their continuous support of the company.

Speaking about the future of coal demand, Mr. Singh said, “It is estimated that the coal demand would continue to remain high in the coming times.”

“We have also made advance preparations, keeping in view the erratic rainy season and other operational challenges, to meet the rising demand by producing more coal,” the CMD said, informing us that the company had also done capital expenditure (CAPEX) of Rs 3,805 crore for FY’22, which would help MCL in meeting the future goals.

The Company, the CMD informed, would produce 176 million tonnes of coal in the financial year 2022-23.

MCL is the largest coal-producing company in the country, having its mining operations spread over Sundergarh, Jharsuguda, and Angul districts of Odisha.