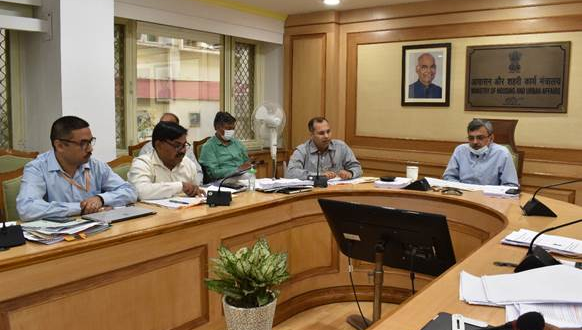 Project proposals in 6 States approved for construction with net increase of 2.42 Lakh houses

in National March 31, 2022 Comments Off on Project proposals in 6 States approved for construction with net increase of 2.42 Lakh houses 280 Views

Newdelhi:31/3/22:In the 60th meeting of Central Sanctioning and Monitoring Committee (CSMC) chaired by Shri Manoj Joshi, Secretary, Ministry of Housing and Urban Affairs (MoHUA), project proposals in six states have been approved for construction with net increase of 2.42 Lakh houses under Pradhan Mantri Awas Yojana (Urban). The houses are proposed to be constructed under Beneficiary Led Construction (BLC), Affordable Housing in Partnership (AHP) and In-Situ Slum Rehabilitation (ISSR) verticals of PMAY-U. The States where project proposals have been approved are Andhra Pradesh, Gujarat, Maharashtra, Tripura, Tamil Nadu and West Bengal

The meeting began with Secretary, MoHUA, discussing the issues pertaining to the grounding of houses in these States. He also reviewed the pace of completion and delivery of houses. Revision of projects and performance of the participating States with respect to the Mission was reviewed in the meeting.

The construction of PMAY-U houses is in various stages. The total number of sanctioned houses under the Mission is now 117.9 Lakh; of which around 95.2 Lakh have been grounded for construction and around 56.3 Lakh have been completed and delivered to the beneficiaries. The total investment under the Mission is ₹ 7.70 Lakh Crore, with Central Assistance of ₹ 1.96 Lakh Crore. So far, Central Assistance amounting to ₹ 1.18 Lakh Crore has already been released.

There has been renewed emphasis to accelerate housing construction, completion and delivery of houses under PMAY-U with the vision of ‘Housing for All’.

ARHCs, a sub-scheme under PMAY-U, provides dignified affordable rental accommodation to urban migrants/poor in urban areas close to their workplace. It is being implemented through two models. Under Model 1, existing Government funded vacant houses are converted into ARHCs through Public-Private Partnership or by Public Agencies; Under Model 2, construction, operation, and maintenance of ARHCs is being done by Public/Private Entities on their own vacant land.