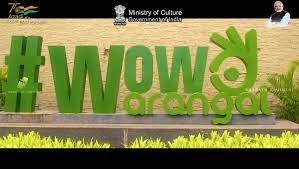 in National March 28, 2022 Comments Off on Warangal in Telengana to host the second leg of colourful cultural extravaganza of Rashtriya Sanskriti Mahotsav 215 Views

The Mahotsav will have an auspicious beginning with the performance by local artists and choreographed folk performances. It will also witness classical Music performances by Hyderabad Brothers (Carnatic Vocals) and musical performances by Padmshri awardee Shri Darsham Mogulaiah , Ms. Mangali, playback singer and others.

Folk artists perform impromptu throughout the day either on the stage or among the public. The main cultural performance is staged between 5.30 pm to 10.30 pm.

Apart from Folk troupes eminent Padma & Sangeet Natak Akademi awarded classical artists covering all genres have been performing every year at the Mahotsav. Special care is taken to choose artists reflecting regional flavour of the State where the Rashtriya Sanskriti Mahotsav is organised.

Under Rashtriya Sanskriti Mahotsav events will be organised at Warangal on  29th  and 30th March 2022 and in the third leg in  Hyderabad for 3 days from 1st April to 3rd April 2022.

Rashtriya Sanskriti Mahotsav (RSM), was conceptualized by the Ministry of Culture, Government of India in 2015 and aims to celebrate the spirit of Tradition, Culture, Heritage and Diversity of our incredible country. Apart from the broader objective, this Mahotsav aims to Preserve, Promote & Popularize the heritage of Indian Spirit & reconnect the new generation with our culture and showcase to the country and the world our soft power of unity in diversity.

The first Rashtriya Sanskriti Mahotsav which was  organized in the grounds of IGNCA, New Delhi in November, 2015

2022-03-28
Editor in chief
Previous: Union Minister exhorts IIT Bombay to ensure prominent role for India in new and emerging world order
Next: President of India to confer Padma Vibhushan, Padma Bhushan and Padma Shri Awards for the year 2022 at the Civil Investiture Ceremony-II