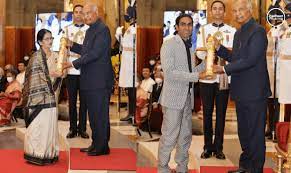 This year a total of 128 Padma Awards were conferred, including two duo cases (in a duo case, the Award is counted as one). The list of awardees comprises four Padma Vibhushan, 17 Padma Bhushan and 107 Padma Shri Awards.

The awardees included 34 women and 10 persons from the category of foreigners/NRI/PIO/OCI and 13 posthumous awardees.

Among the dignitaries present on the occasion were the Vice President of India, Prime Minister and Union Minister for Home Affairs, a communique from the Rashtrapati Bhavan said.

The awards were announced on the eve of Republic Day.