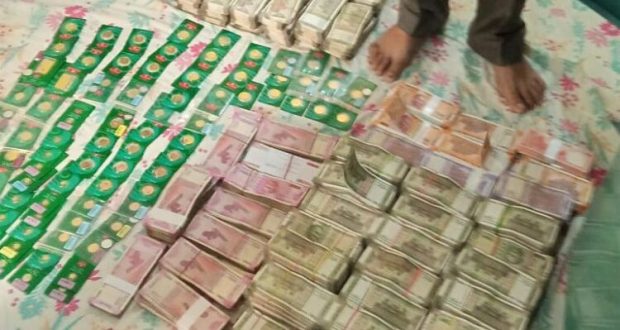 Malkangiri28/3/22:: The Odisha Vigilance has seized Rs 1.36 crore cash from the houses of Ashis Kumar Dash, Superintendent Engineer, Rural Works, Malkangiri. This is the highest ever cash seizure by the agency.

The Vigilance had carried out raids at various places in connection with allegations against Dash regarding possession of assets disproportionate to his known sources of income. On the fourth day of the raids, Dash’s house at an apartment located at Belgachia, Trishulia, Cuttack was searched today, during which Rs 1.15 crore cash and 632 grams of gold biscuits/ coins were recovered.

A total of 12 Axis Bank accounts in name of Dash’s family members, relatives and associates, which were operated by him, have been unearthed by the anti-corruption agency. He had deposited Rs 2.25 crore in these accounts.

Previously, deposits of Rs 1.77 crore were traced by the Vigilance.

Verification of various bank accounts and two bank lockers were yet to be done, official sources said.