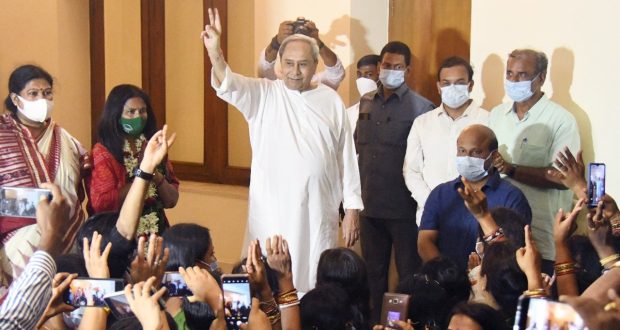 in State News March 26, 2022 Comments Off on BJD president Naveen Patnaik thanked the people of the State for giving a massive mandate to BJD in the urban polls 217 Views

Bhubaneswar26/3/22:: Odisha Chief Minister and Biju Janata Dal (BJD) president Naveen Patnaik thanked the people of the State for giving a massive mandate to BJD in the urban polls.

Taking to his Twitter handle, Patnaik said that BJD’s huge victory in the Urban Local Bodies (ULBs) elections has become possible due to the blessing of the people of Odisha and the dedication of uncountable workers of the party.

He further said the love of the people at the ward level proves BJD’s popularity at the grassroots level. Let’s all join and work together for the benefit and development of the people.

The BJD’s Mayor candidates in the three municipal corporations of Bhubaneswar, Cuttack and Berhampur-Sulochana Das, Subash Singh and Sanghamitra Dalei respectively have trounced their nearest rivals by huge margins.

The counting of the votes for 108 Odisha Municipal Corporations/NACs has almost been completed. As per the reported result, Biju Janata Dal (BJD) has got the majority in 95 ULB councils.

BJP remained distant second with 6 while Congress and other candidates take away 4 and 3 ULB councils respectively.