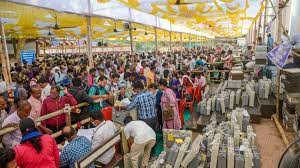 Bhubaneswar24/3/22:: Around 65% of polling was recorded in 106 urban areas including 47 municipalities and 49 NACs and three Municipal Coportations in the general elections to Urban Local Bodies (ULBs) in Odisha, informed the State Election Commission (SEC) on Thursday.

Today, polling was held peacefully at 4360 booths in 1825 wards in 106 urban areas of Odisha including 47 municipalities, 49 NACs, and three Municipal Corporations. A total of 40.55 lakh voters were registered in these places for voting, the SEC said.

The SEC said that polling was delayed for some time during the initial hours due to technical glitches in EVMs. However, the voting continued smoothly soon after.

On the other hand, voting in Ward No 8 in Umerkote Municipal Council in Nabarangpur district has been postponed due to the distribution of wrong ballot papers. Voting will be held here tomorrow (Friday), the SEC further informed. The State Election Commission has thanked the polling officials, police personnel, district and police administrations, all political parties, media personnel, and the people of Odisha for their cooperation in the polls.