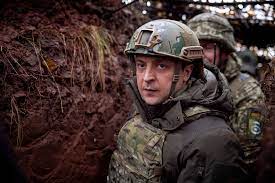 in International March 20, 2022 Comments Off on Ukrainian President Volodymyr Zelenskyy Ready To Negotiate With Putin 93 Views

Kyiv: 20/3/22;Ukrainian President Volodymyr Zelenskyy on Sunday said that he is ready for negotiations with Russian President Vladimir Putin however, he warned that if they fail “that would mean that this is a third World War.”

“I’m ready for negotiations with him. I was ready for the last two years. And I think that without negotiations we cannot end this war,” The Kyiv Independent reported quoting Zelensky.

“I think that we have to use any format, any chance in order to have a possibility of negotiating, the possibility of talking to Putin. But if these attempts fail, that would mean that this is a third World War,” he added.

Zelensky has previously said that his priorities in the talks are clear: “The end of the war, security guarantees, sovereignty, restoration of territorial integrity, real guarantees for our country, real protection for our country.”

Zelensky also told Zakaria on Sunday that if Ukraine “were a NATO member, a war wouldn’t have started.”

He repeatedly has warned of the potential for the Russia-Ukraine conflict to mushroom into an all-out global war.