Top Headlines
Home » National » India is the land of peace, our eternal ideals teach ‘welfare of all’ – Vice President India is the land of peace, our eternal ideals teach ‘welfare of all’ – Vice President

in National March 19, 2022 Comments Off on India is the land of peace, our eternal ideals teach ‘welfare of all’ – Vice President 71 Views

Addressing the gathering after inaugurating the South Asia Institute of Peace and Reconciliation (SAIPR) in Haridwar today, the Vice President lamented that India’s famed, age-old education system was severely dented by centuries of foreign rule.

He said that prolonged colonial rule deprived large sections, including women of education and only a small elite class had access to formal education. “It is necessary to provide quality education to all, only then can our education be inclusive and democratic,” he said. Shri Naidu also expressed his happiness over National Education Policy’s attempt to Indianise our education system and expressed strong disapproval of the mentality that considers everything Indian as inferior.

​Emphasizing the need to re-connect with our roots, the Vice President wanted the family elders to spend more time with the young children so that the latter can better imbibe our rich cultural values and traditions. He also advised the youngsters to spend time with nature and called it the best teacher.

Stressing the importance of mother tongue in our lives, the Vice Pr​​esident exhorted the youth to practice, propagate and promote their mother tongues. “I would like to see a day when Indians talk to their fellow countrymen in their mother tongue, the administration is run in mother tongue and all government orders are issued in people’s language,” Shri Naidu said. He also called for use of local languages in court proceedings.

With social and other tensions on the rise in the strife-torn world, the Vice President said that peace is a prerequisite for humanity’s progress. “Peace has a cascading effect—it engenders social harmony and paves the path for progress and prosperity,” he said, underlining that the ‘dividend of peace’ benefits every stakeholder and brings wealth and happiness to the society. 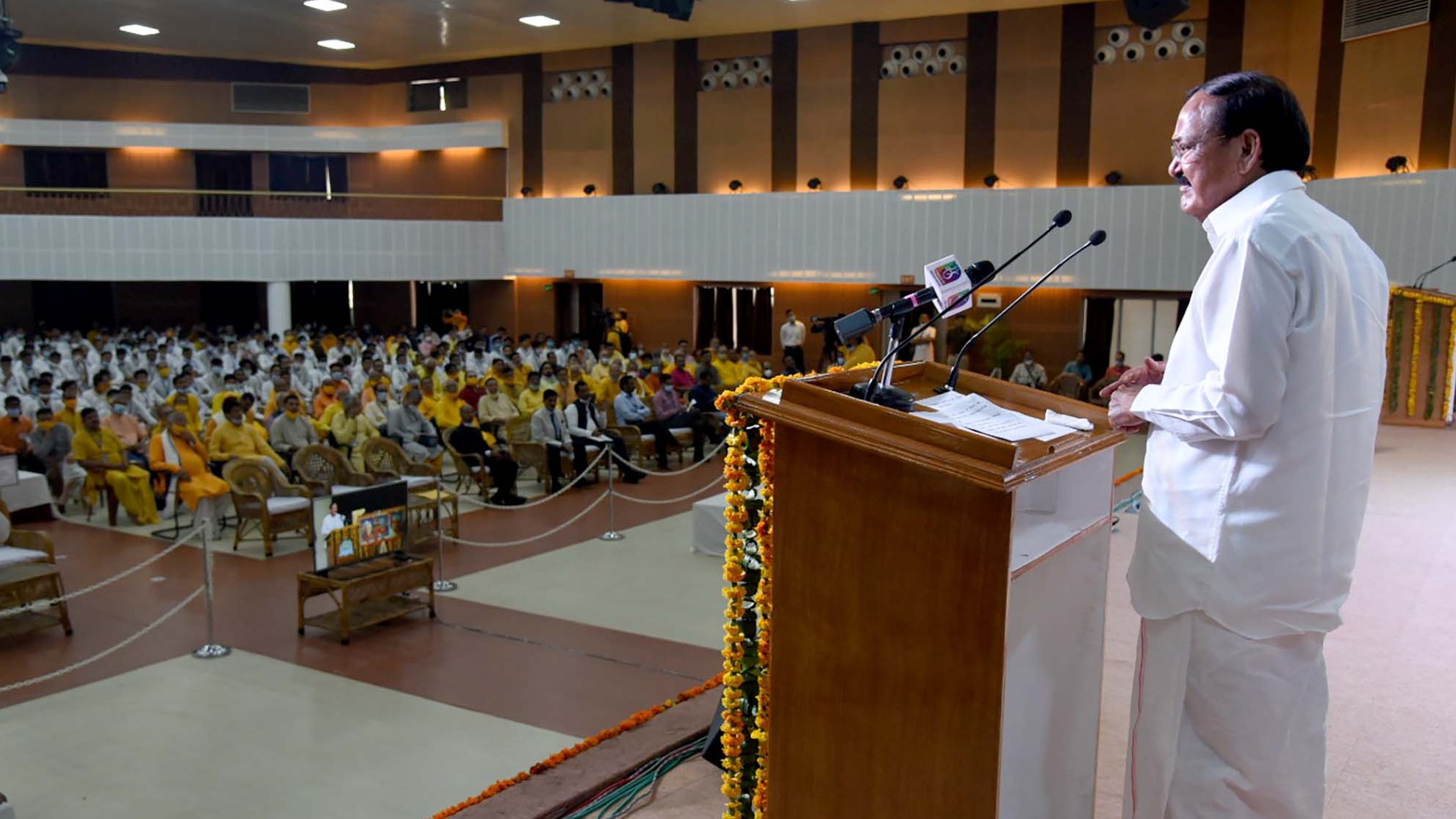 Referring to our age-old civilizational values of ‘VasudhaivaKutumbakam’ and ‘LokahSamastahSukhinoBhavantu’, Shri Naidu said that India’s commitment to peace and welfare of humanity transcends geographical boundaries. “India is known as a land of peace. We have always accorded highest priority to maintaining peace and ensuring harmonious living of all sections of the society,” he added.

Noting that South Asian countries share common history and civilization, he also called for respecting the linguistic, ethnic and cultural diversities in the region, which showcase the core values of tolerance and peaceful coexistence. “As the ‘spiritual capital’ of the world, India will continue to play its part in maintaining peace and ensuring harmony,” he added.

Congratulating everyone involved in the establishment of South Asia Institute of Peace and Reconciliation (SAIPR) , the Vice President hoped that the institute will become an important center for academic deliberations and act as a springboard to spread the values of peace and reconciliation. It may be noted that SAIPR has been established at the Dev Sanskriti Vishwavidyalaya in Haridwar in the Golden Jubilee year of Gayatri Teerth.

On this occasion, the Vice President remembered Lord Buddha and Emperor Ashoka and said that they preferred Dhamma Ghosh over ‘Yudh Ghosh’ (war) and Panchsheel, as propounded by Lord Buddha, forms the basis of our foreign policy.

Shri Naidu also lauded the efforts being made by Dev Sanskrit Vishwavidyalaya in collaboration with various institutions to make Yoga and meditation popular across the world. He called Yoga India’s unique gift to humanity.

After inaugurating the Institute, the Vice President visited SAIPR & Asia’s first center for Baltic Culture & Studies. He also had Darshan at PragyeshMahakal Temple and planted a Rudraksha sapling at the university premises. During his visit to the university, he was also shown various facilities at the institute such as paper manufacturing unit, Center for Agriculture and Cow Based Products, and handloom training center. The Vice President also paid tribute to the martyrs at the ‘Wall of Heros’ in the DSVV campus and launched various publications of the university, including its new website.

2022-03-19
Editor in chief
Previous: Government of India has decided that annual parades of all Central Armed Police Forces (CAPFs) will be held in different parts of the country
Next: NMDC signs MoU with IIT Kharagpur for Drone-Based Mineral Exploration