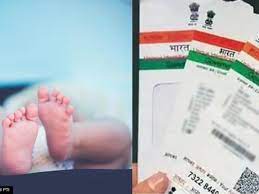 in State News March 17, 2022 Comments Off on Odisha government has decided to enroll of Aadhaa for newborns at Hospitals 208 Views

Bhubaneswar17/3/22:: In its bid to ensure 100 percent Aadhaar coverage, the Odisha government has decided to enroll newborns, right after they are born in hospitals.

The decision was taken after it was noticed that Aadhaar enrolment for children in the age group of 0-5 years was “minimal”.

Following this initiative, if implemented, could ensure they get immediately enlisted.

With this, Odisha will also be the first state to introduce such facilities in hospitals and as per the government decision, the newborns will be enrolled without biometrics.

“When they turn 5 and then 15, they need to update their biometrics (fingers, iris and facial photograph),” a senior official said, adding that around 14.83 lakh of 40.36 lakh children in the age bracket of 0-5 years have been enrolled in the state thus far.