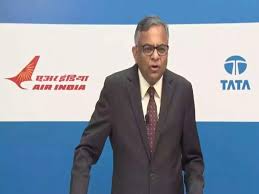 in National March 14, 2022 Comments Off on Tata Sons chief Natarajan Chandrasekaran was appointed as chairman of Air India 254 Views

The development came days after Ilker Ayci, former chairman of Turkish Airlines, turned down the Tata Group’s offer to be the chief executive officer and managing director of Air India.

As a result, Turkey’s Ilker Ayci had declined to be the chief executive of Tata’s Air India.

Mr. Chandrasekaran is the Chairman of Tata Sons, the holding company and promoter of more than 100 Tata operating companies. He joined the Board of Tata Sons in October 2016 and was appointed Chairman in January 2017.

The 53-year-old Tata veteran started as a software programmer in 1987. He rose through the ranks to take the top job when he was just 46 and become one of the youngest CEOs in the Tata group.

It has also rolled out a 100-day plan for Air India to improve the airline’s operational and service standards.

The Tata group plans to expand Air India’s network, modernize its fleet, spruce up its customer service and make it the world’s most technologically advanced airline, N. Chandrasekaran said in his first address to Air India staff last month.

“We want to ensure every Indian is able to fly directly to as many destinations as possible,” Chandrasekaran said, adding that the airline will achieve its targets with strong financial discipline.

Mounting fuel prices due to the ongoing crisis in Ukraine remain a key challenge for Chandrasekaran to steer Air India towards profitability. Air India has never made an annual profit since its merger with Indian Airlines under government ownership a decade ago.