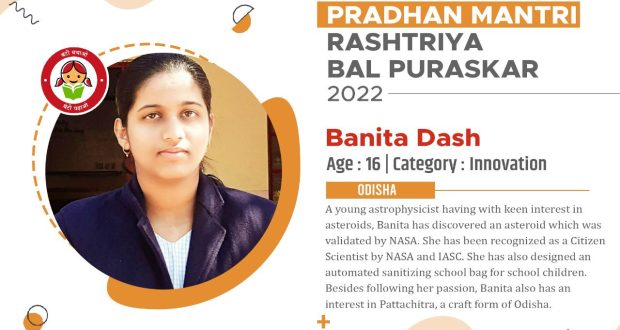 Total 29 Children have been conferred the Pradhan Mantri Rashtriya Bal Puraskar this Year, selected from all regions of the country for their exceptional achievements in Innovation (7), Social Service (4), Scholastic (1), Sports (8), Art & Culture (6) and Bravery (3) categories. There are 15 Boys and 14 Girls among the awardees belonging to 21 States and UTs.

Banita is a native of Nabarangpur district and a student of Navodaya Vidyalaya in Madhya Pradesh’s Amarkantak in Anuppur district. Banita joined the Khagolshala Asteroid Search Campaign (KASC) in January this year.

2022-01-24
Editor in chief
Previous: International Badminton event ‘Odisha Open 2022 will be held between January 25th and January 30th
Next: BSF will launch a boat ambulance in Malkangiri’s Swabhiman Anchal on the occasion of Republic Day