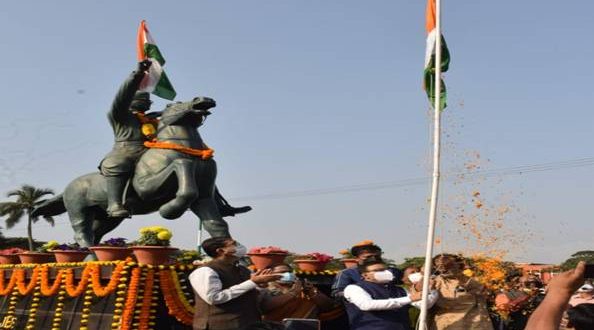 Paradip:24/1/22:Republic Day celebrations began on January 23 this year to include Netaji Subhas Chandra Bose’s birth anniversary, in line with government’s aim to highlight important aspects of our history and culture. At Paradip Port, officials led by Shri P.L. Haranadh, Chairman, offered floral tributes at the statue of Netaji near Paradip Bus Stand. Shri Haranadh visited the homes of local freedom fighters in Jagatsinghpur namely Shri Madhabananda Manohari of Nuapara village, Shri Bhagirathi Swain of Ichhapur village & Shri Jogendra Maharana of Aanlla village, and felicitated them. During the course of interaction, the freedom fighters described how they in their adolescent time participated in the freedom struggle and contributed to the nation-building exercise, in the post-independence era. Shri Haranadh wished them healthy lives and urged the younger generations to be inspired by these living patriots. 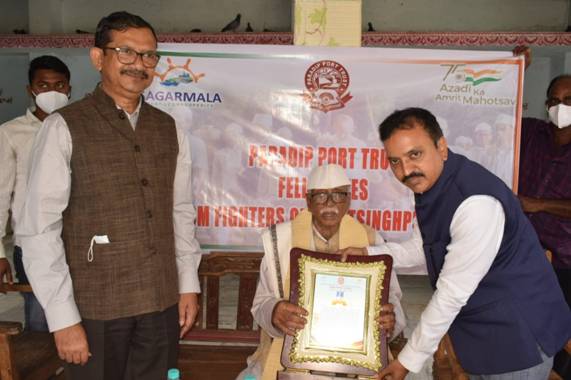 Deendayal Port Trust, Kandla paid homage to Netaji Subhas Chandra Bose on his 125th birth anniversary. In a tweet message, the Port mentioned that the courageous and daring steps Netaji took to fulfill his fierce commitment to the idea of a Free India — Azad Hind — make him a national icon. Syama Prasad Mookerji Port, Kolkata paid rich tributes & homage to Netaji, and mentioned that he will keep inspiring us for generations to come.