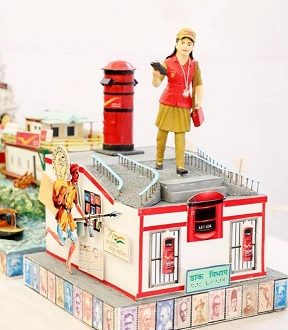 in National January 22, 2022 Comments Off on India Post to reaffirm it’s commitment towards women empowerment through its R- Day tableau 64 Views

Newdelhi:22/1/22:India Post has been serving the nation for the last 167 years, standing unabated in its dedication and undying passion for rendering postal, financial and government services, in the remotest corners of the country. As the nation celebrates Azadi Ka Amrit Mahotsav, commemorating the seventy-fifth year of independence, India Post, through the Republic-Day tableaux, has attempted to reaffirm its commitment towards women empowerment both within and through the Post offices.

The tableaux shall showcase the following elements:

India Post stands as a model employer of women and with its mandate for financial inclusion almost 50% of account holders of the India Post Payments Bank as well as the Post Office Savings Bank are women.

The tableau displays the robust outreach and the modern face of India Post that ties the entire country in one thread and aims to portray its focus on women empowerment through the ‘All Women Post Offices’.  Divyang friendly post offices as portrayed by the ramp reiterate our social commitments.

Post Woman: The tableau presents the modern face of India Post featuring a young postwoman with a digital device in one hand and a postman’s bag in the other, thus conveying the message of blending technology with tradition. Standing tall beside her is the ubiquitous red-letter box that reflects people’s unabated faith in India Post. Also displayed are India Post Services like speed post, e-commerce, ATM Cards etc. which are trusted by millions of customers. The image of the postwoman is juxtaposed with that of the Harkara on high relief projecting the transition of India Post over the decades.  The two images are set in the foreground of the ubiquitous red-letter box. 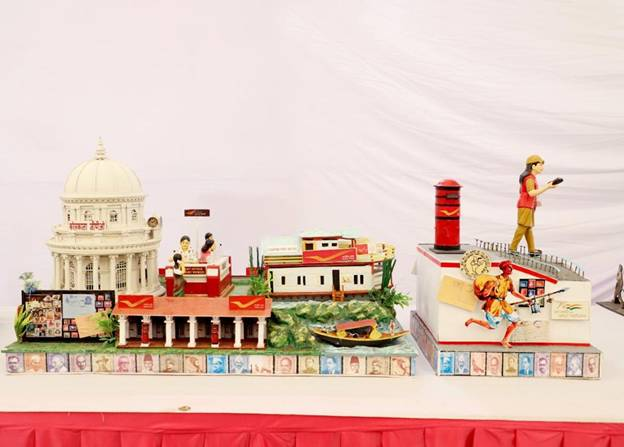 All WOMEN POST OFFICE: The All Women Post Office showcases India Post’s resolve and a step towards gender equality.

The 3D images of the post office counters where we see women officials rendering multifarious service to the customers such as Aadhar enrolment as well as Postal ATM Counters emphasizes India Post’s resolve towards women empowerment. In the case of India Post Payments Bank, almost 50% of account holders (2.24 Cr.) are women and 98% of such accounts have been opened at doorsteps.

KOLKATA GPO: At the rear is the Kolkata GPO; the oldest GPO, a proud witness to the journey of India Post and one of the iconic heritage buildings of India.

THE LOWER PART OF THE TRAILER: Adorning the tableau, a collage of stamps pertaining to the country’s freedom struggle, digitally printed on khadi and meant to be displayed in different post offices across the country after Republic Day.

GROUND ELEMENT: However, the uniqueness of the tableaux lies in its foot soldiers who are real-life postmen/postwomen from different parts of India. They stand symbolic of the transition of India Post from the harkaras to the postmen in bicycles and e-bikes, thus highlighting our journey.

2022-01-22
Editor in chief
Previous: Agriculture Ministry to provide grant up to Rs. 10 lakhs to agricultural institutes for purchase of drones
Next: BRO conducts final blast concluding all excavation on Sela Tunnel Project