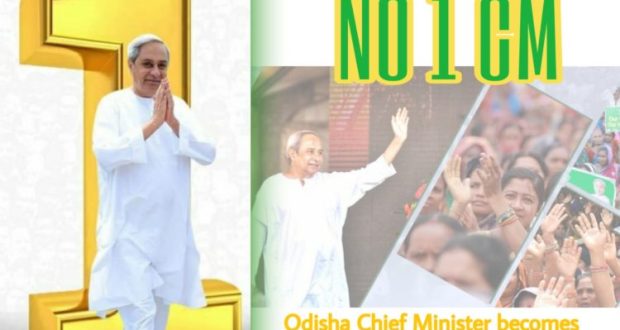 in National, State News January 21, 2022 Comments Off on Odisha Chief Minister Naveen Patnaik has been adjudged the Most Popular CM of the country yet again 65 Views

Bhubaneswar:21/1/22: In an acknowledgment of good governance and compassionate leadership, Odisha Chief Minister Naveen Patnaik has been adjudged the Most Popular CM of the country yet again, in India Today’s Mood Of The Nation survey. About 71% respondents reposed faith in his governance model.

The Mood of the Nation poll, conducted twice a year by the India Today Group, is an extensive country-wide survey that aims to gauge the nation’s mood.

According to the 2022 edition of the India Today-CVoter biannual Mood of the Nation (MOTN):, respondents of every state were asked to evaluate the performance of their respective CMs and nearly 71% of respondents of the total of 2,743 from Odisha said they were satisfied with Naveen Patnaik

This apart, With efficient handling of #COVID19, Odisha has topped the India Today’s Mood Of The Nation survey as the best state in handling the pandemic. An impressive 76.7% respondents have rated the State’s performance as ‘outstanding’.