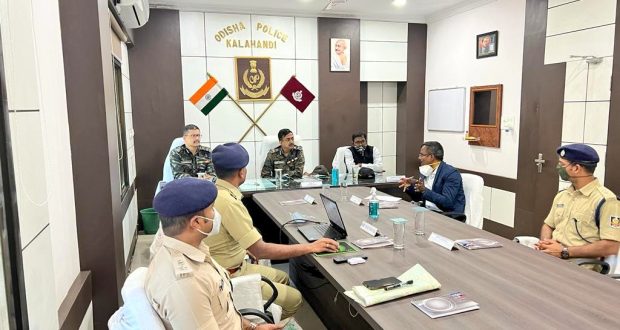 in District Diary January 16, 2022 Comments Off on Odisha DGP reviewed the Maoist situation in Kalahandi and Nuapada districts 109 Views

Nuapada:16/1/22:Director-General of Police Sunil Kumar Bansal paid a visit to Nuapada on Sunday to take a stock of the preparedness for the upcoming Panchayat polls and review the Maoist situation in the district.

This was the first visit of Bansal to a Maoist-affected district in the State after taking over the charge as DGP.

Bansal held a meeting along with other top police officials to discuss the preparedness of the upcoming polls and the Maoist situation in the district. He also congratulated Odisha Police for their successful operations against the left-wing extremists at Sunabedha sanctuary along the Odisha-Chhattisgarh border.

The top police official visited Kalahandi after the completion of the meeting at Nuapada.

Later, talking to media persons, Bansal said, “Adequate police and security personnel will be provided to the district to conduct the forthcoming Panchayat polls in a smooth manner.”

“Combing operations against the Maoists will be intensified ahead of the polls,” he added.

2022-01-16
Editor in chief
Previous: India marks 1 year of its nationwide vaccination drive against Covid19; Over 156 cr doses administered
Next: Odia Para-Athlete Breaks World Record for maximum distance covered by a person with a disability in a wheelchair