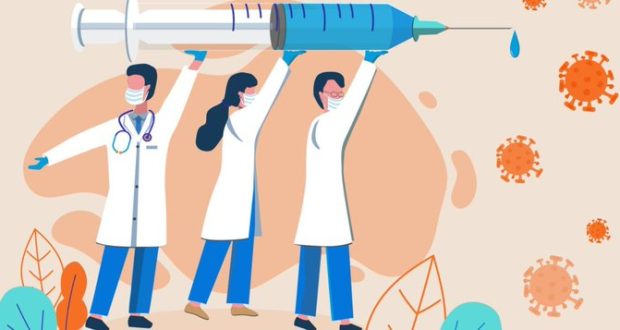 Newdelhi:15/1/22:There have been some media reports alleging a ‘significant undercount’ of the actual number of people who have died in India due to COVID-19 in the first two waves, claiming that the final toll may be ‘substantially greater’ crossing the figures of about three million.

It is clarified that such media reports are fallacious and ill-informed. They are not based on facts and are mischievous in nature. India has a very robust system of birth & death reporting which is based on a Statute and is carried out regularly from the Gram Panchayat level to the District level and State level. The whole exercise is carried out under the overall oversight of the Registrar General of India (RGI). Moreover, the Government of India has a very comprehensive definition to classify COVID deaths, based on globally acceptable categorization. All deaths are being independently reported by States, and are being compiled centrally. The backlog in COVID19 mortality data being submitted by the States at different times is being reconciled in the data of Govt of India on a regular basis. A large number of States have regularly reconciled their death numbers and have reported arrear deaths in a broadly transparent manner. Therefore, to project that deaths have been under-reported is without basis and without justification.

It is clarified that there is an extreme difference in COVID caseload and linked mortality between Indian States. Any assumptions putting all States in one envelope would mean mapping skewed data of outliers together with States reporting lowest mortality which is bound to stretch the median towards higher and wrong results.

Furthermore, there is an incentive in India to report COVID deaths as they are entitled to monetary compensation. Hence, the likelihood of underreporting is less. During a disruptive situation like the pandemic, the actual mortality could be more than the reported deaths due to many factors, even in the most robust health systems. However, any analysis with the view to deducing information collected from extremely varied caseload and outcome situations among Indian states is bound to be incomplete and incorrect.

These current media reports on ‘significant undercount’ of the actual number of people who have died in India are based on a study that seems biased in nature as only adults with COVID-19 symptoms were captured and cannot be thus representative of the general population. There also appears to be selection bias as the survey is restricted to phone-owning people who can also take out time to answer questions comprehensively. The sample could be skewed towards urban areas in that sense, where more cases were reported, and thus, have a higher reporting. They are also people likely to be more aware and have greater reporting bias.

The media reports quoting the study mention how about 2100 randomly selected adults were interviewed every week. These reports do not clarify whether the same adults were repeatedly asked, or they cumulatively added up to 1.37 lakhs.  Evidently, the results will be very different in both these cases. The media reports further mention that the response rate was 55%. It is not clear from this whether people refused to talk or does it mean that they said there were no symptoms. Secondly, if data on only adults with COVID symptoms was captured, this introduces a bias in the study and cannot be thus representative of the general population.

It is also to be noted that the denominator of the mentioned study is the UNDP estimate for 2020. This is itself a combination of survey, census, and models, thus an estimate. Based on this it has been estimated that 3.4% households will report a death. This needs to be compared with the data of the Registrar General of India (RGI), which this study has not done. The study mentions that from June 2020- March 2021, 0 to 0.7% households reported COVID deaths while from mid-April to June 2021, reported deaths reached a peak of 6%. This short period has been extrapolated to measure overall deaths from June 2020 to July 2021. This is clearly not a valid way of calculation as it does not take into account monthly and geographical variations

In addition, the media reports stated that “We ascertained from approximately 57,000 people in 13,500 households who lived in the immediate household as of January 1, 2019, who died and when, and if the respondent thought the death was due to COVID or a non-COVID cause”. It is observed that firstly, the sample size is too low, and secondly, how would the household members know that the death was due to COVID. Incorrect framing of such questions can lead to erroneous responses. While the authors have used three different sources to make a comparable estimation, it is noted that source data being used, represent self-reporting and estimated data from ten States which will only lead to another estimation and is not reflective of an actual situation. Assuming COVID tracker survey as more nationally representative data, when it is self-reported, may be highly incorrect.

Further, it is observed that there is a contradiction in the report wherein the authors have referred to misclassification in non-COVID cases. The report states that “Compared to 2019, the increase in non-COVID deaths reported during Sept-Oct 2020 exceeded reported COVID deaths but the reverse was true during April-June 2021.’ It is not clear how non-COVID deaths, which are a subset of total deaths, can be greater than total deaths. Besides, it seems the above has been deduced from the US statistics, and is not clear how it is being aligned to the Indian scenario. Attributing the probability of death to rural areas without medical attention may be highly incorrect. Many States had rural areas with very low infection rates for sustained periods of time. This has not been taken into account in projecting the estimates in the said study.

Moreover, as per the reports, increased mortality has only been captured for specific time periods of COVID peaks, which may not reflect comparable figures since the pandemic is still ongoing. This may need a more thorough comparison and estimation based on recent data, once available, since several factors such as disease prevalence, hospitalization due to past infection or debilitating disease, infection detection rate, infection fatality rate including (definition of COVID deaths) crude death rate, etc., may have to be factored in to deduce or gain better clarity on the numbers.

The topic of excess deaths due to a certain cause is valid, very significant from public health point of view and most acceptably required for better policy action and adoption of formidable, sustainable health measures. However, any rush in making the assumptions of excess deaths any time during an ongoing situation can be more of an academic exercise driven by knowledge of public health/ data scientists. More logical and acceptable measures for administrative and policy making quarters would evolve from more robust government data emerging from exercises like SRS or Census data in the coming months.N

2022-01-15
Editor in chief
Previous: More than 157.87Crore vaccine doses provided to States/UTs
Next: Queen’s Baton for the 2022 Commonwealth Games reached at Puri