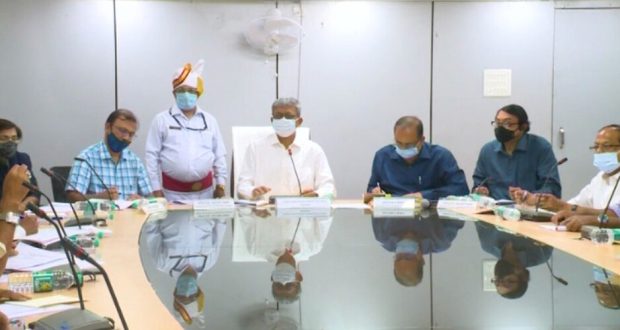 in State News January 15, 2022 Comments Off on Leading political parties in Odisha have proposed to increase the limit of election expenditures 134 Views

Bhubaneswar:15/1/22:Leading political parties in Odisha have proposed to increase the limit of election expenditures by Sarpanch and Nominee candidates for the forthcoming three-tier Panchayat elections.

The proposal was made during an all-party meeting called by the State Election Commission (SEC) Aditya Prasad Padhi in Bhubaneswar on Saturday.

As per reports, more than 50 representatives of various political parties took part in the meeting chaired by Padhi and gave their proposals for necessary reforms in the election process.

Most of the political parties were unanimous in their opinion to ban liquor seven days ahead of the elections.

“Many kinds of disturbances in the election process is happening due to alcohol. So, it has been proposed to ban liquor in the State seven days ahead of the election,” said Ganeswar Behera, senior Congress leader.

It was also emphasized in the meeting to prepare the voters’ list without any mistake before the ensuing elections which is most likely to be held in the beginning of next year.

“The voters’ lists will be prepared before the ensuing election without any mistake. The Electors Photo Identification Card (EPIC) id number of the voters will be added along with their names to the list,” said BJP leader Shankarshana Parida.

Meanwhile, the political parties also proposed to increase the duration of the polling period.

“Usually the voting time was from 7 am to 12 pm. But this time, there will be centralised counting at the block level instead of booths. Most of the political parties were of the view to increase the duration of polling period by two more hours,” said SEC Padhi.

2022-01-15
Editor in chief
Previous: Conducting the forthcoming Panchayat elections in Odisha in a free and fair manner will be a unique challenge
Next: Dr Mansukh Mandaviya releases commemorative Postal Stamp on COVID-19 Vaccine