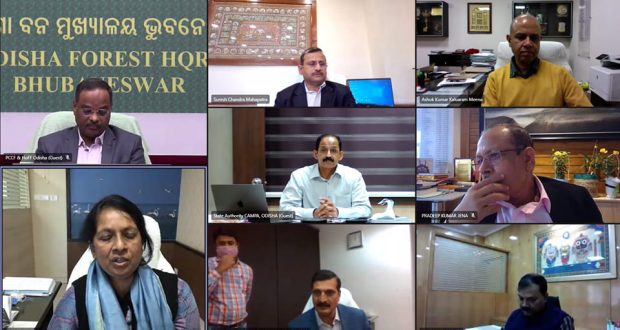 Bhubaneswar:13/1/22 The investment in Ama Jungle Yojana ( AJY) and Joint Forest Management ( JFM) has yielded its dividend for Odisha with net increase of dense forest area by 243 sq kms during last two years as per India State of Forest Report (ISFR)-2021.

While complimenting the department for these achievements, the Chief Secretary directed the department to focus on preventive fire protection. Sri Mahapatra said “As forest fire creates devastation to a large number of plant and animal life, the field officials must remain extremely vigilant to check the outbreak and spread of the fire.  He directed the DFOs and field level forest officers to have more fire-break lines in the forest and keep those clean for checking the spread of the fire. They were also asked to ensure active involvement of the local community in this task.

Further, Mahapatra was directed to raise the seedlings through WSHGs. It was decided that the WSHGs would grow 18-month-old seedlings which would be used for plantation under different forestry prgrammes. Department was also asked to increase the area under silk plantation as these trees supported the livelihood activities of many forest-dependent families.

The Committee deliberated and approved the APO of around Rs.1241 cr under CAMPA for the year 2022-23. The principal activities of the APO included compensatory afforestation, wildlife management, improvement of wildlife habitat, new plantation, maintenance of old plantation, silvi cultural operation, silk plantation, soil and moisture conservation, forest conservation, fire protection, infrastructural support to front line workers, and application of IT and GIS methods in forest management. Secretary IT Manoj Kumar Mishra said that DFO offices would be connected through OSWAN network.

2022-01-13
Editor in chief
Previous: Chief Ministers thank the Prime Minister for his leadership during the successive waves of Covid-19
Next: Guwahati-Bikaner Express train (15633) derailed near Domohani in West Bengal