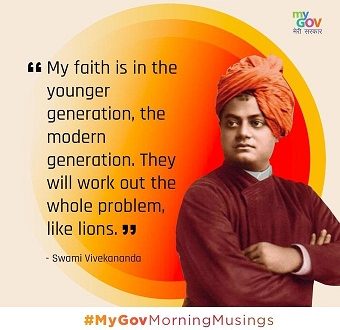 Newdelhi:12/1/2022; On National Youth Day today, Vice President M Venkaiah Naidu has called upon India’s youth to lead the transformation of the nation by playing an active role in nation-building. Mr. Naidu said that our youth must dream big and work hard to achieve their goals. Mr. Naidu said that youngsters must take inspiration from Swami Vivekananda and imbibe his values of nationalism, his belief in universal brotherhood, and compassion for the needy. The Vice President said that our youth must always take pride in the richness of Indian culture.

Prime Minister Narendra Modi has paid tributes to Swami Vivekananda on his birth anniversary. In his message, Mr. Modi said Swami Vivekananda’s life was devoted to national regeneration. He said he motivated many youngsters to work towards nation-building and asked everyone to keep working together to fulfill the dreams Swami Vivekananda had for the nation.