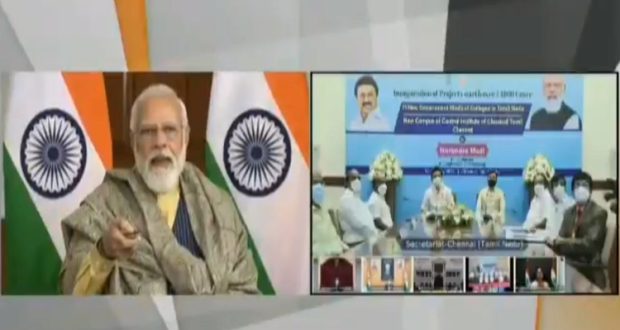 Newdelhi:12/1/22; Prime Minister Narendra Modi inaugurated 11 New Government Medical Colleges across Tamil Nadu and the new campus of Central Institute of Classical Tamil in Chennai via video conferencing on Wednesday evening. The new medical colleges have been established at an estimated cost of about 4,000 crore rupees. Of this amount, around 2,145 crore rupees have been provided by the Union government and the rest by the Tamil Nadu government.

During his virtual address, the Prime Minister said that it is a record-breaking day for him to inaugurate eleven new medical colleges in Tamilnadu. He highlighted that in 2014, our country had 387 medical colleges, but in the last seven years only, this number has gone up to 596 medical colleges. He said, there were only seven AIIMS in the country before 2014 but now, the number of AIIMS approved has increased to 22. The Prime Minister pointed out that shortage of doctors had remained an issue for a very long time and the current government made it a priority to address this critical gap. He said that it was NDA Government that had established more colleges and increased the number of seats in medical education. In 2014, India had around 82,000 medical Undergraduate and Postgraduate seats. Mr. Modi said that in the last seven years, this number has gone up to around 1.48 lakh seats.

Mr. Modi said that the regional imbalances were sorted out and it was a great moment for him to inaugurate colleges in the backward districts of Ramanathapuram, Virudhunagar, and Nilgiris. The Prime Minister said that the Government has liberalized medical education without compromising the quality of education. Referring to the Central schemes, he said that through 8,000 medical stores of Prime Minister’s Jan Aushadi Yojana, the poor and the middle-class people have been benefitted.  He said that three thousand crore rupees have been allocated to Tamil Nadu in the next five years for urban health care, and the establishment of wellness centers and critical care centers in the State.

The Prime Minister said, COVID-19 pandemic has reaffirmed the importance of the health sector and the future will belong to societies that invest in healthcare. He mentioned that Ayushman Bharat initiative has helped the poor to have access to top quality and affordable healthcare. The Prime Minister asserted that India has everything needed to be a hub for medical tourism.
The districts in which the new Medical Colleges were inaugurated today are Virudhunagar, Namakkal, The Nilgiris, Tiruppur, Thiruvallur, Nagapattinam, Dindigul, Kallakurichi, Ariyalur, Ramanathapuram, and Krishnagiri.

The establishment of these medical colleges is in line with the Prime Minister’s constant endeavour to promote affordable medical education and improve health infrastructure in all parts of the country. The new medical colleges, with cumulative capacity of 1,450 seats, have been established under the Centrally Sponsored scheme of ’Establishing of New Medical Colleges attached with existing district and referral hospital’. Under the scheme, medical colleges are established in districts which do not have either a government or private medical college.

The establishment of a new campus of Central Institute of Classical Tamil in Chennai is in line with the Prime Minister’s vision to protect and preserve Indian heritage and promote classical languages. Speaking after the inauguration of this institute, Mr. Modi said, he has always been fascinated by the richness of the Tamil language and culture. He said, one of the happiest moments of his life was when he got a chance to speak a few words in the world’s oldest language, Tamil, at the United Nations.

The new campus of Central Institute of Classical Tamil is fully funded by the Union Government. It is built at a cost of 24 Crore rupees. The Institute which was operating from a rented building so far will now operate from a new 3 storey campus. The new campus is equipped with a spacious library, an e-library, seminar halls, and a multimedia hall. It will provide an efficient working environment for the institute in its pursuit of promoting classical Tamil across the world.

Wishing Pongal and Makar Sankranti greetings to the people of the State, Prime Minister Modi said that the Centre would take all efforts to digitalise and popularize Tamil studies and provide a wider canvas to students and researchers to translate Tirukkural in other Indian and foreign languages. The establishment of a Tamil Chair in Banaras Hindu University was also one of the steps taken by the Centre in a view to promoting the concept of Ek Bharat Shreshtha Bharat. Mr. Modi called upon the medical fraternity to keep working to provide inclusive and quality healthcare services and wished peace and prosperity to all during Pongal.

Speaking at the function, Tamilnadu Chief Minister MK. Stalin expressed happiness and gratitude to the Prime Minister for taking interest in the welfare of the students in the State. He said that he had appealed to the Centre to provide more funds in health care for the State and described the various medical welfare schemes implemented in the State.