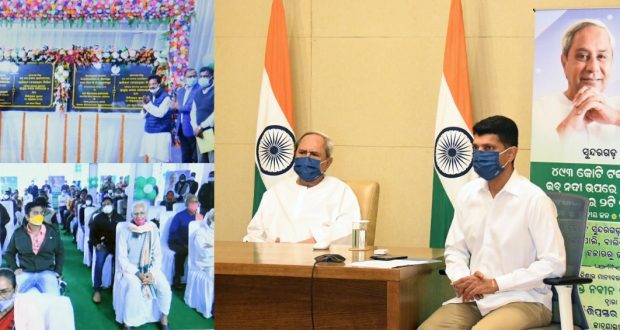 Bhubaneswar:10/1/22: Odisha Chief Minister Naveen Patnaik on Monday laid the foundation stone of two barrages to be built on Ib River at an estimated cost of Rs 493 crore at Kopsingha and Kudabanga in Sundargarh district.

The two projects will be completed in the next two years and will benefit around 47,000 people in Sundargarh Sadar, Lephripara, Balisankara, and Tangarpali blocks, and Sundargarh Municipality.

In addition, 488 hectares of land will be irrigated. Drinking water will be provided to households in the above blocks and fishermen can earn a living by farming fish in this barrage.

As a bridge is to be built over the two barrages, the people of Lephripara and Tangarpali blocks will gain direct access to Rourkela.

On this occasion, Patnaik said that the State government has launched the ‘Construction of in-stream Storage Structure’ scheme from its own funds to solve the water problem in the state.

Barrages will be constructed in 30 places along various river streams in the State at a cost of Rs 11,700 crore, so that the farmer can get water for the land forever, groundwater levels will remain stable, and clean piped water can be supplied to the surrounding villages. The two projects launched in Sundargarh today are part of the scheme.

The Chief Minister said that Sundargarh is the lighthouse of development in Odisha. Rourkela City, Rourkela Steel Plant, and NIT Rourkela have enhanced Odisha’s prestige.

The Chief Minister said that the three important projects involved the memory of former Chief Minister Biju Patnaik, adding that Sundargarh has given a lot to the whole country, and coal from Sundargarh is supplying energy to the country.

Stating that the largest hockey stadium in Asia is to come up in Sundargarh and hockey players from the district have brought glory and pride to the country, the Chief Minister said that AIIMS in Sundargarh is the right of the people of the district.

Expressing his pleasure over the successful implementation of various programs ranging from 5-T School Transformation to Mission Shakti in Sundergarh, he said that many people in the district are getting better medical facilities by availing Biju Swasthya Kalyan Yojana (BSKY) Health Card.

The Chief Minister called on the people to take advantage of various development and welfare programs to contribute to the formation of a new Odisha.