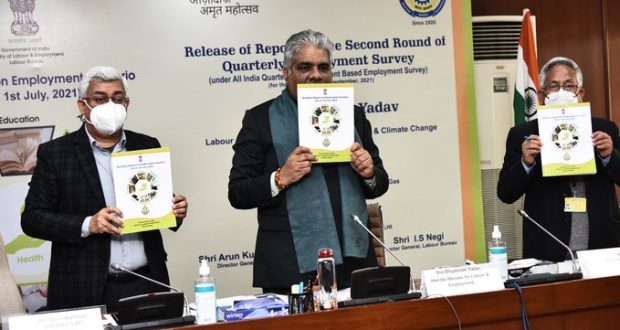 in National January 10, 2022 Comments Off on Labour Minister Bhupender Yadav releases report on 2nd round of Quarterly Employment Survey 233 Views

Sharing the results, Mr. Yadav said, employment is showing an increasing trend across various sectors and total employment in nine selected sectors stands at three crores 10 lakh. He said employment figures are two lakh higher than the estimated employment of the first round of quarterly employment survey. The Minister emphasized that last-mile delivery is the prime objective of the Government. He said the Ministry has entrusted nationwide surveys to the Labour Bureau for evidence-based policymaking in order to achieve the objective.

The report highlights that the manufacturing sector engages 39 percent, education 22 percent, and Health, 10 percent of the estimated workers. The overall percentage of female workers stood at 32.1 percent which is nearly three percent higher than the percentage reported during the first round of the survey.

The report further highlights that regular workers constitute 87 per cent of the estimated workforce in the nine selected sectors, with only 2 per cent being casual workers. However, in the construction sector, 20 per cent of the workers were contractual and 6.4 per cent were casual workers. The nine selected sectors are Manufacturing, Construction, Trade, Transport, Education, Health, Accommodation & Restaurant, IT & BPO, and Financial Services.

2022-01-10
Editor in chief
Previous: 4,033 cases of Omicron variant of Covid-19 reported so far in India
Next: Russian President to take part in emergency meeting of CSTO Council to discuss Kazakhstan