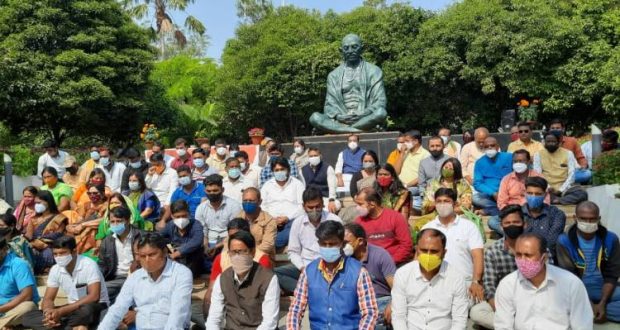 The party workers from various districts — Nayagarh, Bargarh, Sambalpur, Balasore, Cuttack, Bhubaneswar have demanded stern action against the culprits in the breach.

Protesting in front of a statue of Mahatma Gandhi in the Capital city, BJP General Secretary Lekhashree Samantsinghar blamed the Punjab Government for the security breach.

“Prime Minister Modiji is one of the best leaders in the world at present. We strongly condemn the conspiracy against him. We demand stern action against the culprits,” said Samantsinghar.

Notably, Modi’s convoy was held up on a flyover at Ferozepur, around 30 km ahead from its destination, National Martyrs Museum in Hussainiwala, due to a road blockade by protesters on Wednesday.

2022-01-08
Editor in chief
Previous: 14 more Omicron cases were detected in Odisha:total number of infected in the state rises to 75
Next: NALCO Kharavela & Kalidas awards presented at the 42nd Foundation Day