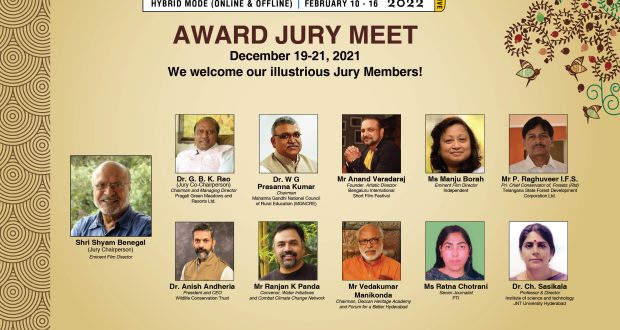 in Environment, National December 23, 2021 Comments Off on First time in its history Asia’s biggest Environmental Film Festival, and Forum  CMS VATAVARAN is organizing its Awards Jury Meet at Hyderabad 265 Views

December 17, 2021, New Delhi: One of the most eminent filmmakers of India, Mr. Shyam Benegal, who is often regarded as the pioneer of parallel cinemas in India, is heading a 10- member jury for the coveted CMS  VATAVARAN Environment & Wildlife Film Festival Awards which is being held from December 19-21, 2021 at Pragati Green Meadows and Resorts in Hyderabad.

Pragati Green Meadows and Resorts is a one-of-its-kind resort in the country – it is a man-made eco-village developed on barren land creating a natural habitat.  By following Vedic living practices and Rishi Sanskriti, Pragati Green Meadows and Resorts realized its cherished belief of Live and Let Live which is also very similar to the CMS VATAVARAN’s philosophy. In this 85 acres of greenery, full of flora and fauna, the award jury members will be viewing all the 105 films that have been nominated to select the winners in each category. A total of 66 National films and 39 International films are competing in 9 different categories.

In all, this Jury will decide 20 awards in 9 Indian and International categories. The eminent jury members will also be selecting two Best of the Festival Awards out of the 105 nominees.

Mr. Shyam Benegal, who is heading the Award Jury, said, “CMS  VATAVARAN is an important endeavour that everyone needs to support. Films are a powerful medium to address important issues to the masses.”

“The uniqueness of this festival is to promote and use meaningful films to connect people to nature and contemporary environment challenges. Aiming at diverse stakeholders, the festival is able to engage in complex environmental issues and inspire conservation efforts at multiple levels. This is the first step to restore and conserve the only planet we have!” said Dr. P N Vasanti, DG CMS and Festival Director, CMSVATAVARAN.

Nomination Jury: For the first time the Nomination Jury for the 11th CMS VATAVARAN was held virtually from November 12 to 26, 2021. The nomination jury comprised 29 representatives from various organizations like WWF, IYBN, Department of Science & Technology, JNU,  IIT, High Commission of Canada, etc. and it was chaired by Dr. V B Mathur, Chairperson of National Biodiversity Authority, GOI.

In a three-tier selection process, after an initial festival directorate screening, 292 films were submitted to the Nominations Jury, who in five groups (5-7 persons each) watched the various categories of films and selected these nominated films. Now all these Nominations will be seen by the Award Jury to select the coveted CMS VATAVARAN Awards.

Upcoming 11th CMS  VATAVARAN: All nominated and awarded films will be screened in the upcoming film festival and forum. The 11th edition has been scheduled to be held from February 10th to 16th, 2022 in hybrid mode for the first time. All full seven days of the festival will have online screenings and programs and will be further supplemented by offline (on-ground) programs on the first three days (10, 11 & 12 February 2022).

About CMS  VATAVARAN: CMS  VATAVARAN is India’s premier environment and wildlife film festival and forum – it is aimed towards enhancing understanding, appreciation, and shift in attitudes towards the natural world and to increase space for environmental issues in mass media and evolve a nationwide environment outreach framework. The festival taps into an important motivating factor for audiences everywhere: the emotional draw of connecting with a compelling story or character.  The festival reaches out to people from all walks of life including filmmakers, civil society groups,  government organizations,  environmentalists, researchers, conservationists, policymakers, activists, public and private sector organizations, and students of all ages, and is recognized as a  calendar event amongst filmmakers, environment, wildlife, and conservation sector. Its unique twin-track approach of organizing competitive and traveling film festivals and environment forums has positioned it as one of the most prestigious film festivals across the globe. Since its inception in 2002, ten competitive and 52 traveling festivals in  41  cities of  25  Indian states have been organized.