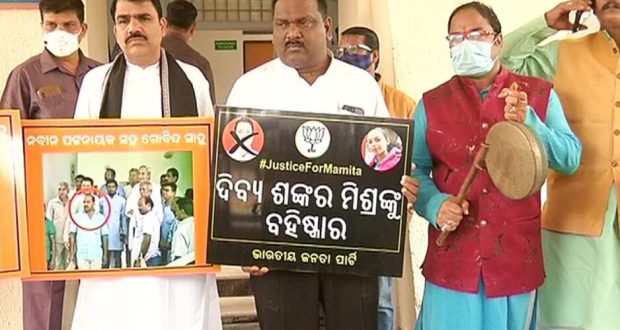 Odisha Assembly, the eighth day too saw the opposition disrupting the House proceedings

in State News December 9, 2021 Comments Off on Odisha Assembly, the eighth day too saw the opposition disrupting the House proceedings 214 Views

Bhubaneswar:9/12/21:As it has been the norm from Day One of the ongoing winter session of the Odisha Assembly, the eighth day (Thursday) too saw the opposition disrupting the House proceedings over demands of the ouster of MoS (Home) Dibyashankar Mishra. However, the departmental grants were guillotined in the House after it re-convened in the afternoon.

Some BJD MLAs surrounded Jena in a bid to shield him from the Opposition ruckus so that he can present his demand for departmental grants. In fact, the situation forced the Speaker to guillotine all the departmental grant demands in the House.

The ruckus was flared up after placards were thrown at the Speaker’s podium resulting in suspension of the proceedings for the day.

Earlier in the day, a homage was paid in the Odisha Assembly to the Chief of Defence Staff (CDS) General Bipin Rawat, his wife and 11 others who died in the tragic Mi-17V5 helicopter crash near Coonoor in Tamil Nadu on Wednesday afternoon.

Moving an obituary reference in the Assembly, Chief Minister and leader of the House Naveen Patnaik said: “He (Gen Rawat) had an extremely distinguished career of over four decades of selfless service marked by exceptional gallantry. He was conferred with the Param Vishisht Seva Medal, Ati Vishisht Seva Medal, Vishisht Seva Medal, and many prestigious awards. He expired on December 8, 2021 at the age of 63.”

The Assembly observed one minute silence as a mark of respect to the departed souls and then adjourned till 4 pm.

2021-12-09
Editor in chief
Previous: Actors Katrina Kaif and Vicky Kaushal tied the knot
Next: National Statement by Prime Minister Narendra Modi at the Summit for Democracy