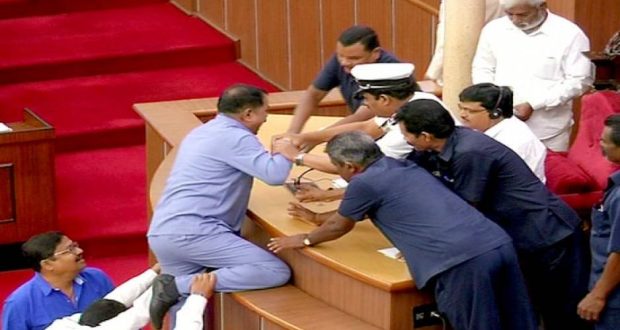 Bhubaneswar:6/12/21:  Pandemonium continued to prevail in the Odisha Assembly for the seventh consecutive day of the Winter Session on Wednesday as both the opposition BJP and the Congress members created ruckus in the House throughout the day.

Though Speaker SN Patro has called an all-party meeting twice on Wednesday, it failed to bring normalcy to the House.

The House was adjourned several times and could not transact any business.

As soon as the House assembled for the day at 10.30 a.m., just like Tuesday, the opposition BJP and the Congress members rushed to the well, holding placards and banners.

The BJP members also beat gongs and bells as a mark of protest.

They sought slogans reiterating their demand for the removal of the Minister of State (MoS) for Home, Dibya Shankar Mishra over Mamita Meher murder case.

The House also witnessed a poster war between BJP and BJD. The BJP members showed the photographs of Gobind Sahu, the prime accused in the Mamita Meher murder case with Chief Minister Naveen Patnaik.

The BJD members also sat on a dharna in front of the statue of Mahatma Gandhi alleging double standard practiced by BJP in Mamita Meher murder case.

BJD leader Pratap Deb alleged that Mohanlal Sharma, the advocate fighting for Gobind Sahu, the prime accused, is an active member of the BJP. He alleged that the BJP is maintaining a ‘double standard’ on the murder case.

However, BJP leader and opposition Chief Whip Mohan Majhi rejected the allegation made by the ruling party saying that Sharma is not a member of the BJP.

2021-12-08
Editor in chief
Previous: Odisha Mining Corporation organised a Customer Meet for the buyers of Iron, Chrome, and Bauxite ores
Next: ICC signs MoU with Odisha govt, RITES to undertake to study on the logistics infrastructure of state