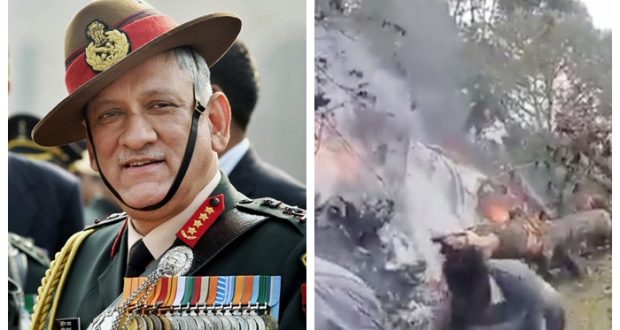 An Indian Airforce helicopter Mi 17 V-5 carrying the Chief of Defence Staff Bipin Rawat and thirteen others crashed in the forest area near Coonoor in the Nilgiris District of Tamil Nadu today. Apart from the crew, CDS Bipin Rawat’s staff and family members were also on board in the chopper which crashed. The passengers include Madhulika Rawat, President of Defence Wives Welfare Association, Brig. L.S.Lidder DA to CDS, Lt.Col. Harjinder Singh SO to CDS and five PSOs. The helicopter was on its way to the Sulur Airbase. Indian Air Force has said, an inquiry has been ordered to ascertain the cause of the accident.

General Bipin Rawat was an alumnus of National Defence Academy, Defence Services Staff College and National Defence College. He was commissioned on 16th December in 1978 into the Fifth Battalion of the Eleventh Gorkha Rifles of the Infantry, the Battalion which was Commanded by his father. During his distinguished career in the Army, Bipin Rawat commanded an Infantry Battalion along the Line of Actual Control in the Eastern Sector, a Rashtriya Rifles Sector, an Infantry Division in the Kashmir Valley and a Corps in the North East. Bipin Rawat had also commanded a Multinational Brigade in the Democratic Republic of Congo. As an Army Commander, he commanded a theatre of operations along the Western Front and was appointed the Vice Chief of the Army Staff before assuming the office of Chief of the Army Staff. The General was the Chief of the Army Staff from 31st December 2016 to 31st December 2019. As the first Chief of Defence Staff Bipin Rawat assumed the charge on 1st January 2020. He was awarded several gallantries and distinguished service awards during his service in the Army. With Naseem Naqvi, Bhupendra Singh, AIR News, New Delhi.

2021-12-08
Editor in chief
Previous: Air version of BrahMos supersonic cruise missile successfully test-fired from Sukhoi 30 MK-I off Odisha coast
Next: Regional Workshop on Export Promotion with Thrust on Quality for the Eastern and North East Region held at Bhubaneswar