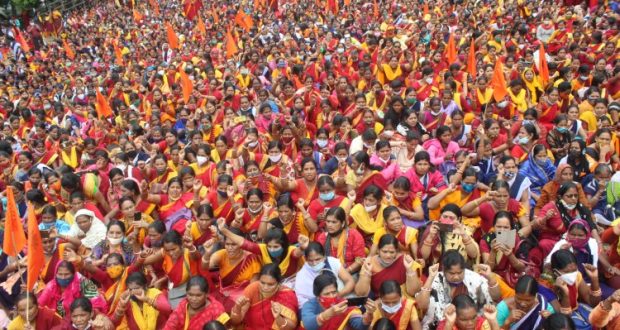 Bhubaneswar:6/12/21: Demanding an increase in wages and recognition as government employees, thousands of Anganwadi workers staged a massive protest on the Master Canteen-Lok Seva Bhawan road in Bhubaneswar on Monday.

The workers of All Odisha Anganwadi Ladies Workers Association raised slogans against the state government to fulfill their demands amid the winter season of the Assembly.

They alleged that the state government had promised to fulfill five demands–salary hike, increase in retirement age, 50% promotion as supervisor, summer holidays, and pension benefits. However, the government only considered increasing their work tenure.

Agitating over this, they demanded to remove the previous Anganwadi scheme and recognise them as government employees with Rs 21,000 monthly salary. They also demanded a minimum wage of Rs 10,500 for Anganwadi co-workers.