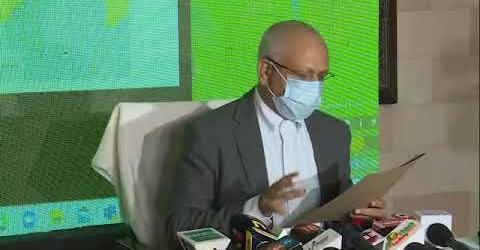 Bhubaneswar;3/12/21:The Odisha government on Friday stepped up measures in view of the looming cyclone threat. As per the latest India Meteorological Department (IMD) update, the cyclonic storm, which has been named Jawad, is currently centred some 470 km off Gopalpur and 580 km from Paradip.

In the last six hours, the cyclonic storm moved at a speed of 22 kms per hour. Special Relief Commissioner (SRC) Pradeep Jena today said cyclone Jawad is likely to re-curve and approach near Puri coast on December 5.

However, it is still not clear whether the cyclonic storm will hit the coast. Even if it touches the coast, it is likely to re-enter the sea and move towards West Bengal, he said.

As per the SRC, the wind speed will be around 80 kmph, gusting up to 90-95 kmph as it nears the Odisha coast near Puri.

By December 5, the velocity of the stormy wind will come down to 60 to 65 kmph. Earlier, Cabinet Secretary Rajiv Gauba chaired the second meeting of the National Crisis Management Committee (NCMC) and reviewed the preparedness of States and Central Ministries/Agencies to deal with the cyclonic storm “Jawad”.